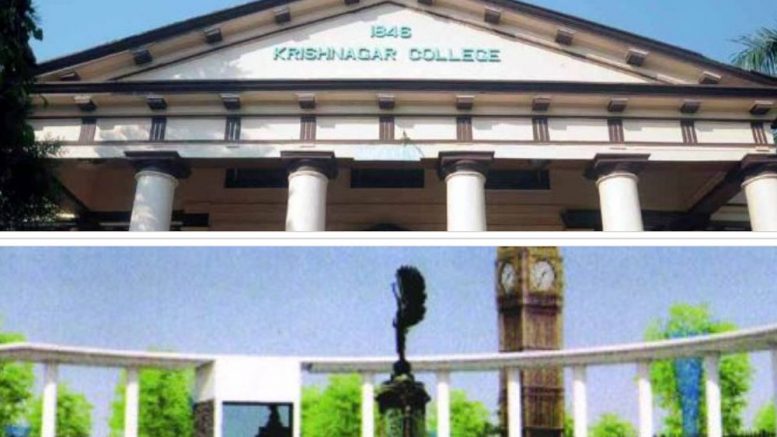 Krishnanagar, Nov. 26: An amusement park proposed to be constructed by Krishnanagar Municipality in front of 171 year old Krishnanagar Government College on a piece of 3-acre land owned by it, under Atal Mission For Rejuvenation and Urban Transformation (AMRUT) project has created a major controversy as its alumnus body has raised objection alleging that it would spoil the sanctity of this old campus and jeopardy the scope of its prospect as a ‘deemed’ university being considered by the government.

In a written protest to District Magistrate of Nadia the alumnus body stated that the College land cannot be used for any purpose other than education as it was the sole condition of former Nadia King Srish Chandra Roy who donated 36-acres land for the college with Cossimbazar queen Swarnamoyee Devi.

Surprisingly enough, neither the civic authority nor the district administration did bother to obtain any approval from the college’s governing body for the project, even though the DM is its de facto president.

College principal professor Sovon Niyogi said: “I have no idea about the project. Nothing was discussed with me”.

The initial cost of the project has been estimated Rs.2-crores of which Rs.82-lakh has been released by Government to commence work by next month. The land (Gaabtala) where the park proposed to be set up

Nadia DM Sumit Gupta said: “We took up the project for developing greenery and well maintained open spaces for children and elderly citizens which is not available in Krishnanagar town. Moreover, I was told that the proposed land is low-lying and inaccessible. But, I will see the land. Notwithstanding, if park is constructed, I think it will not pose any threat to academic atmosphere. It would be too early to apprehend about future”

Chairman of Trinamul ruled Krishnanagar Municipality Ashim Kumar Saha termed the protest by the alumnus as a ‘ploy’ by some CPM backed ‘uneducated’ lot, even though 285 members of the Krishnanagar Government College Alumni Association (KGCAA) include prominent Trinamul leaders and activists.

The college was set up in 1846 by the initiative of Lord Hardinge. The college has large uncovered campus consisting of administrative block, faculties, hostels, staff quarters and a large unused open land which is often used for hosting government fares and meetings. The college at present offers PG courses in science and arts.

Secretary of KGCAA Khagen Dutta, a retired bank employee said: “Over 36-acres of land for college was donated by former kind Nadia Srish Chandra Roy and queen of Cossimbazar Swarnamoyee Devi. The sole condition of their gift was that the land should only be used for academic purposes. But, the proposed amusement park has no academic purpose. Such a park would fascinate huge crowd and spoil the sanctity of the college and hamper expansion. Moreover, the government cannot acquire college land in this way without any approval of the governing body”.

“We took up the project for developing greenery and well maintained open space for children and elderly citizen which is not available in Krishnanagar town. Moreover, I was told that the proposed land is low-lying and inaccessible. But, I will see the land. Nothwithstanding, if the park is constructed, I think it will not pose any threat to academic atmosphere. It would be too early to apprehend about future” – Sumit Gupta, DM

College alumni and Trinamul leader Archana Sarkar, who is also a member of state women’s commission said: “Neither district administration nor the municipality has any right to acquire land in such way for a non academic and commercial purpose. This is unfortunate as it happened when we appealed for “Deemed University” status for the college and chief minister personally assured me to consider it. It would require land for expansion in near future. But, if the park is constructed the campus will be disturbed. We offered alternative land for park, but administration acted in prejudicial manner”.

Municipality chairman Ashim Kumar Saha said: “If a park spoils academic atmosphere then Calcutta University campus would have spoiled by College square. There are several parks close to prominent colleges and educational institutions in Kolkata and none of those campuses were spoiled as far as I know. The unnecessary protest appears to be just a ploy by some CPM backed uneducated alumnus to stall the development in Krishnanagar”.