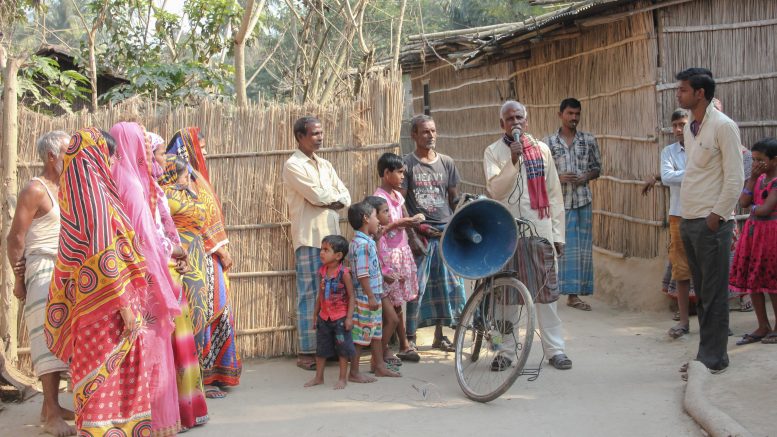 Joyrampur (Nadia), Jan. 16: His three sons, who worked in Ernakulam as construction laborers, had lost jobs due to cash crisis following demonetization. He had to survive eating only boiled rice once a day for more than a month as his sons could not send him money due to cash crisis. He has closely witnessed similar troubles of about 900 families in his panchayat area, where about 2000 youths have returned home losing their jobs. For about two months, he could not sell his ‘Chorar Boi’, the “window of knowledge” to the people in the area that cost only Rupees 5.

67 year old Sheikh Arejulla Hossain of Nadia’s Joyrampur village thinks that poor countrymen like him and his neighbors have had suffered enough as Prime Minister Narendra Modi has literally made the country “cashless” announcing the scrapping of notes.

But unlike others, Arejulla has not just merely accepted the government’s decision, rather this elderly man has launched a sort of crusade in own way.

Chief minister Mamata Banerjee would be happy to learn that far away from Calcutta (195km) this rustic lanky man who actually earns by selling “chora” on social evils penned by him, has been narrating the impacts of demonetization in own words.

Arejulla, however, this time is not selling his “chora”, rather making people aware, as he knows that people having no money to buy his books.

So as he used to do, tying a microphone set to his bicycle and holding a loud speaker in one hand, Arejulla, a naturally gifted poet has been roaming through the rustic dingy lanes of the Joyrampur reciting “choras” against demonetization to make villagers aware to aware people on contemporary affairs those published in the day’s news papers.

In an area dominated by elderly dropouts, where people are not interested to read newspapers and gather at the houses of handful of people having television sets to watch the evening soaps after returning home from agricultural works, Arejulla works as their link to the ‘world’.

On November 9, it was from Arejulla, the villagers first came to know about the demonetization.

But, he could not then realize the ensuing sufferings that would eventually made his three sons to lose their jobs. Most of his neighbors had also experienced same fate.

“It appears that since November 9 people like us suddenly become poorer. I know many in villagers who could not afford twice meal daily since then. Those who have old notes rushed to the village cooperative to deposit as they have no bank account. People also not interested to have a bank account because they have to go at least 14km to reach the nearest bank in Karimpur town. So the villagers depend on the cooperative, but it did not exchange the entire value so far. I and my wife who largely dependent on the money sent by my three sons from Kerala suddenly stopped sending money as they also were not getting their daily wages. They also eventually returned home empty handed losing their jobs. I somehow used to earn about Rupees 100 selling my chorar boi, but none was in a position to afford even Rupees 5 for a book”, said Arejulla, who is popular by his sobriquet “Kaviraaj”.

Arejulla’s neighbor Saukat Sheikh: “I deposited Rs.12000 in old notes to cooperative in November. But, till date the cooperative have refunded me only Rs.7000.

Arejulla’s three sons Amzad, Mazarul and Zahidul, who used to earn Rupees 600 per day, have returned empty handed from Kerala in last month, as the firm for which they worked expressed helplessness to pay their daily wage.

Mazarul, who now started acting in jatra to earn money said: “The contractor stopped paying us our wage. As a result we could not send money to home. We returned home otherwise we would die in starvation”.

Arejulla said: “This chora is not for sale, rather to make peop0le feel about an eccentric king whose name is Narenda Modi. I earn money by selling my chorar boi. But, this time I decided it to offer free so that people can relate their pain and give their opinion when opportunity comes”.

Arejulla said: “The motto of Modiji will not be fulfilled. The demonetization has so far no visible impact on nullifying the black money. The only visible impact is the sufferings of the poor people. Until Modiji is taking stern action against giant tax evaders and recovering the dues, his initiative and credibility will remain under question”.

Arejulla is horrified to imagine making transaction of money using mobile phone in local market. Most of the people here are not educated to handle such transaction. Most importantly, people here have no bank account as theire is no bank here”

“She is absolutely right in waging war against Modiji on this issue. Modiji’s decision has made like of poor rural people miserable”, Arejulla said.

Arejulla is not an educated person by the conventional thought. His affair with school ended at the age of 14 when he was in class 8. But, after that never had an apple fallen on his head. Nevertheless, he has prudent thought and has own interpretation on matters everything under the sun.

“I started farming own land as an independent farmer. But, during 1966 I lost interest in farming. Ideas were crowded in my head. I could make poems impromptu with my own interpretations on different issues”, said Arejulla.

An addict of newspaper, Arejulla still regularly rides 2km on his cycle to read newspaper at a tea stall.

“Newspaper is like encyclopedia to me. I earn my knowledge from it. I have not enough money to afford a paper daily. Moreover, hawkers are not interested to deliver paper only for me at such a distance. So I take this trouble to read it for sake of my villagers”, he said.

In fact, a large number of people respect his as a wise person and depends on his interpretations.

Manirul Mondal, a local resident and CPI (M)’s panchayat samity member said: “Arejulla is a unique character. In real term he is a “Samaj Bondhu”. I have doubt if anyone would find a similar character like him across the Bengal. He has tremendous potential and a mind that can explore the reality around us”.