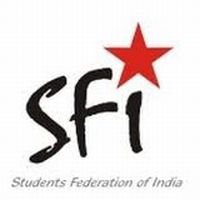 Krishnanagar, Jan.17: 14 students of Palashi College in Nadia, who are scheduled to fight ensuing students’ union poll on January 28, were today summoned at the Kaliganj police station to clarify their points on the allegations of disruptive activities at the college brought against them by Trinamul Congress Chatra Parishad.

The summon issued on 16 January by a Executive Magistrate in Krishnanagar on the basis of a complaint lodged by TMCP at Meera outpost under section 107 of CrPC , had asked the students to appear before OC Kaliganj today.

But, the 14SFI supporters, instead appeared before the magistrate and appealed for anticipatory bail, as they apprehended that they could be arrested a day before submission of nomination to spoil their endeavor to fight the college poll.

The sub divisional executive magistrate today granted bail on PR bond to 13 students. One student could not be granted bail due to erroneous personal details.

However, the bail was granted only after the students’ submitted written undertakings that they would not create any trouble in the campus.

The accused students have to appear before the magistrate again on February 2.

SFI leadership has alleged that the complaints lodged by TMCP and the police initiative for obtaining summon are calculated ploy to bar their supporters to fight the poll by the ruling party and police.

As the legal process to get the bail was time consuming, the students could not submit their nominations today.

Tomorrow is the last date for submission of nominations. The college would go for its first student’s body poll on January 28 for 35 seats since established two years ago.

Nadia has 22 colleges and 2 universities where submission of nominations would be completed tomorrow. TMCP expecting a clean sweep as so far no nomination has been filed by the opposition.

Palashi College is the only college where a direct poll battle is apprehended due to stronghold of CPM. CPM-Congress alliance candidate Hasanuzzaman had won the local Kaliganj seat in 2016 assembly poll.

SFI district leadership is afraid that their candidates will be attacked tomorrow when they will go to submit nominations.

SDO Krishnanagar Sadar Moitrayee Gangopadhaya said: “The notice of the SDEM was not issued on suo moto basis, rather based on the report filed by police”.

Sources said, notice under section 107 of CrPC is generally sent if the police apprehend role of any person is threat to law and order.

SFI Nadia president Babusona Sarkar said: “The TMCP in nexus with police tried to prevent our candidates to fight poll by planning arrest. But as their plan has failed they would tomorrow go all-out to prevent us by force. We are concerned about the security of our candidates. We have no faith in police as they have Trinamul flag bearers”.

Ruling out the allegations TMCP district president Ayan Dutta said: “Specific complaint was lodged against some SFI activists who on a number of occasions threatened our supporters, torn our party flags and unleashed terror. There was no hidden plan. Police had done its duty. We are not afraid of fighting poll at all”.

An officer at the Meera police outpost said: “The students were summoned because of their disruptive activities. There were allegations against them and their role appeared to be disturbing to peace”.

Sources said, TMCP college unit lodged a complaint under section 107 of Cr PC urging police to take action against 14stdents. Police got an order issued by the SDEM, Krishnanagar on Monday that asked the students to appear before the OC, Kaliganj tomorrow.

DYFI Kaliganj block secretary and lawyer of the students Atayur Rahman said: “The allegations were baseless. Police had shown an unusual alacrity to move with the complaints without checking reality and acted only to clear hurdles to ensure uncontested win for the TMCP as per the directions of the ruling party. The summon date was a calculated one as they clearly planned to arrest our supporters to prevent them fighting poll”.

Local resident and DYFI’s state vice President Debasish Achariya said: “The desperation of the police was so categorical as the cops on last night visited home of each of 14 falsely accused students and threatened their parents not to attend college till January 28, else they would face dire consequences”.