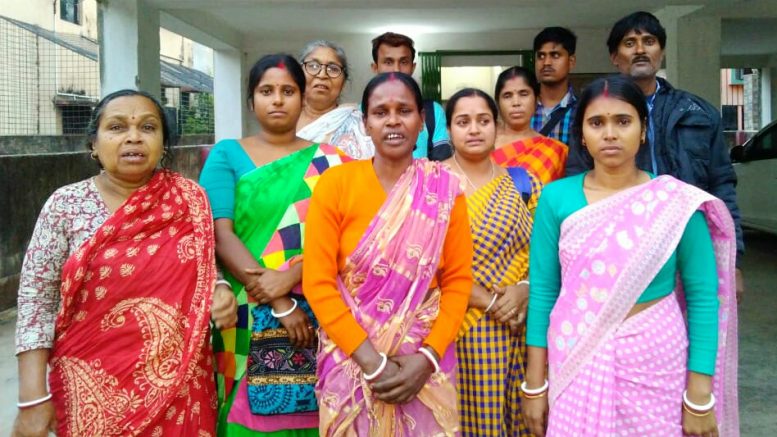 Anxious family members of the eight carpenters from Hanshkhali

Hanshkali, Nov. 25: Police have arrested a sub agent of a Delhi based overseas labour supplying agency from Nadia’s Hanshkhali on Sunday  for forgery and breach of trust after 13 Indian labourers which include 8 from Hanskhali were arrested by Tanzanian police for entering the country without visa and on a fake work permit.

Accused sub agent Srimanta Biswas was trapped by the officials of Calcutta based National Anti Trafficking Committee with the help of the family members of the 8 labourers and handed over to police on Saturday night.

Police on Sunday took Srimanta to Hanshkhali and later produced him before additional chief judicial magistrate’s court in Ranaghat which ordered him five days police custody. Srimanta Biswas being taken to court

Meanwhime, the 13 labourers from Bengal (8) Bihar (2) and Karnataka (3) who were sent to Tanzania to work as “carpenter” with a local farm have been languishing in a jail in Tanzanian port city ‘Dar-es-Salaam’ since October 27 when they were nabbed by Tanzanian police at the airport for arriving without visa and on forged work permit.

Sk Jinnar Ali, Chairman of National Anti Trafficking Committee, a statutory body working to combat human trafficking, who helped the family members of labourers to track them since they they failed to communicate with them for about past four weeks, said, “After making contact with the Tanzanian government we came to know that the 13 Indian were arrested by Tanzanian police as they had no visa with them and the work permit apparently issued by Tanzanian government’s labour commissioner, which the Delhi based agency had given them found to be forged ones. The labourers were later produced before a resident magistrate’s court which on November 13 had convicted them for possessing ‘irregular permit issued without lawful order’ and penalized them them five-lakh Tanzanian shilling each (Rs.15000 approximately). But as they failed to pay the fine, the labourers were sent for six months imprisonment”.

“They will be repatriated to India only after completion of their imprisonment”, he added.

Family members claimed that they dealt with local agent Srimanta who took Rs.1.10 lakh crom each of the labourers had assured visa ‘on arrival’ and job for all against a monthly salary of Rs.50000.

Nipa Biswas, wife of trapped labour Bidyut Biswas said, “It now appears that Srimanta and his Delhi based aides cheated our men and have put them in great danger. We are anxious about their condition and do not know how to get them back home. We have appealed Nadia administration for help”.

Family members claimed that on October 19 the 8 labouurers who are all residents of Harindanga village left home. They boarded plane for Dar-es-Salaam via Dubai and landed at the Tanzanian port city on October 27. But, since October 26, the family members could not contact them. On last week, Bidyut managed to call his family in Hanskhali and appraised everything seeking help to rescue them.

“During the four weeks we could not get any information about them. We appealed repeatedly Srimanta for help. But he avoided us everytime. We then made cincont with the NATC in Calcutta and also Hanskhali police for help”, said a family member.

Sk Jinnar Ali, Chairman of NATC said, “We trapped Srimanta at our office calling him there being interested candidate to work abroad. We later handed him over to police. Meanwhile, we have informed the Ministry of External Affairs about the incident and requested it to rescue the Indians taking up the matter with Tanzanian authorities at appropriate level”.

An officer of Hanskhali police station said, “We have interrogated Srimanta and found lot of inconsistencies in his statement. It appears that he worked as a sub agent. The root of the crime is based in Delhi. We are in touch with Delhi police which arrested main agent Nadeem Salafi. At the same time, the Tanzanian embassy being contacted to know present status of the Indian labourers”.

District Magistrate Sumit Gupta said, “Necessary steps are being taken so that the labourers could return home”.