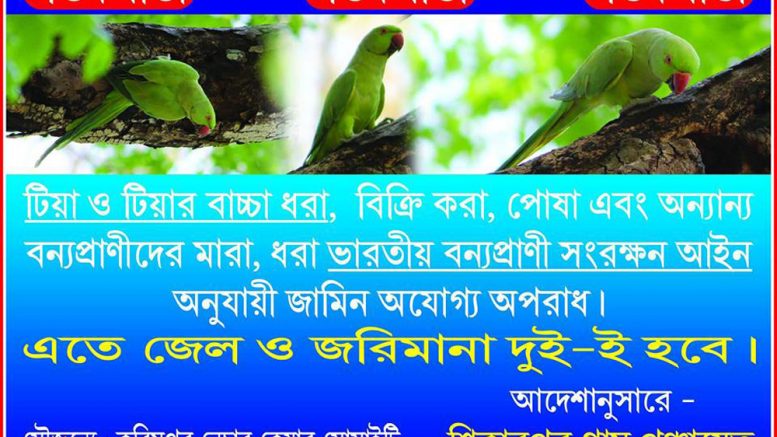 An awareness banner put by the Shikarpur panchayat

Karimpur, March 19: A gram panchayat in Nadia’s Karimpur-I block has started awareness campaigning with a local nature care activists to save the nestlings of parrots, commonly known as “Tiya” and “Phultusi” (rose ringed parakeet and plum headed parakeet) from being theft for lucre by locals engaged by bird traders .

Since last fortnight the officials of the Shikarpur panchayat and members of the Karimpur Nature Care Society have been regularly visiting villages in the area, located close to Indo-Bangladesh border and campaigning against theft of baby parrots urging locals to help the birds survive freely in the area.

As repeated appeals made to the forest department failed to initiate action against theft, the CPM ruled Shikarpur panchayat with the support of the KNCS members have launched the awareness by organizing meetings, circulating leaflets and by hanging banners cautioning the locals that any attack or theft of on the birds would even land then behind bar.

Both rose ringed parakeet and plum headed parakeet, which have great demand to the bird traders, are listed as endangered species protected under schedule IV under Wild Life Protection Act, 1972. These birds cannot be trapped, kept in captivity or sold. The punishment for such offences is imprisonment for a term of 3 years or fine of Rupees 25000 or both.

Pradhan Prasenjit Biswas said: “A large section of the youth in our locality misled by smugglers spoiling the lives of the parrots. We, with the help of KNCS, have been trying to make them understand that these parrots are the part of the beauty of the area. So please allow them to survive”.

Secretary of KNCS Tarun Poddar said: “In last season a huge number of parrot nestlings were stolen and eggs were damaged by a section of local youths. This year we have taken initiative to save their lives with the help of panchayat authorities through awareness”.

Parrots lay eggs during autumn and incubate inside cavities of big trees. Several villages under Shikarpur panchayat in Karimpur are considered as the paradise of parrot.

Huge numbers of parrots gather in Shikarpur every year during autumn to lay eggs and often fell prey to the bird smugglers.

Bird watcher Dipanjan Biswas said: “The Tiya” and “Phultusi” like burrow of old big trees. In Shikarpur there are several old big trees like mehegani, pakur, sagoon located on either side of road, which fascinate these birds who gather in thousands by the end of winter. The adjacent paddy field and Mathabhanga river are added attraction as they provide them food and water during hatching”.

Local sources said that the bird traders also pour in the area during autumn, who lure local youths for lucre and engage them to trap the parrot kids.

Sagar Sheikh, a bird trader from Santipur said: “We give Rupees 150 for every parrot kid aged 7-10days. The kids are later sold at Rupees 500-700 in local markets or in Calcutta based dealers”.

KNCS president Golok Biswas said: “Local youths have no idea that trapping birds is a crime and punishable offence. But, they are doing it for easy money. They generally trap the birds in night or early in the morning. Keep it in soft cartoons and handover to the traders later in the day. We approached the forest officials, but no action taken by them”.

Divisional forest officer (Nadia-Murshidabad) Rana Dutta, however, refuted the allegation. He said: “We also often had undertaken similar campaign against sale or birds and tortoise with the help of municipalities and panchayat. The initiative taken by the pancnayat and the voluntary organization is definitely praiseworthy”.