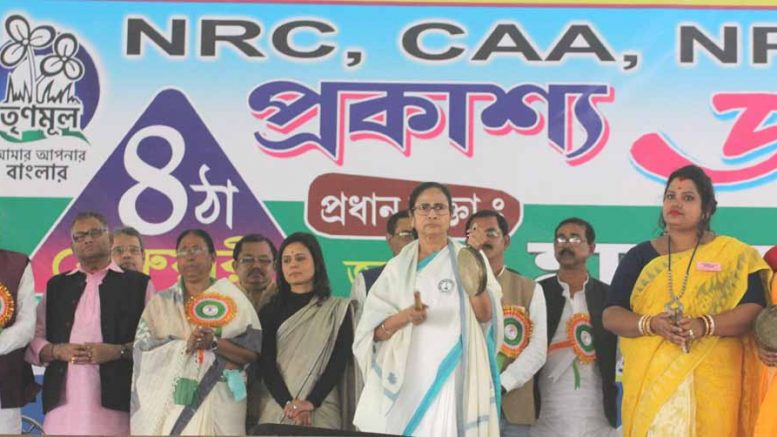 Mamata Banerjee in Habibpur Chhatimtala ground near Ranaghat on Tuesday

Ranaghat, Feb. 04: Chief Minister Mamata Banerjee accused that the BJP has been spreading hatred across the country and branding people protesting the Citizenship Act as ‘Anti National’. She also blamed the party at the party for terrorizing people for speaking against the act. She told this while addressing a huge rally in Ranaghat that was organized to protest against the triple evil of CAA, NRC, and NPR.

She said, “Whoever speaks against the BJP and the Citizenship Act is being branded a traitor and anti-national”. Terming the BJP as a party of ‘hooligans’, she said, “Those who never did any good for our country have suddenly turned into patriots and preaching others patriotism. We will listen to Gandhiji, Netaji, Swami Vivekananda, and Rabindranath Tagore. But why should we listen to a few hooligan leaders of the BJP?”, she further added.

“Today, they are saying that the assailant of Mahatma Gandhi is a big leader. The BJP leaders are instigating people to kill, to open fire unless people listen to their ‘boli’, Is this how a political party should behave?”

Reiterating her protest against the Citizenship Act, she said, “I will neither let NRC implemented in Bangla and nor the NPR since it is the gateway to implement the NRC”.

“More than 30 people have died in Bangla just out of fear of the implementation of NRC. The people are being scared in various ways”, she added.

“It is incredible that people would have to show citizenship proof for their three generations. I again appeal to you to show no documents. If anyone asks anything, don’t give the full information. Don’t submit any documents. Never believe the riotous BJP”, said Mamata Banerjee.

She challenged the BJP to show how much strength it really has. “Many people lie to get votes, to create trouble; I am not in that group. I will welcome with all without any prejudice”, she said.