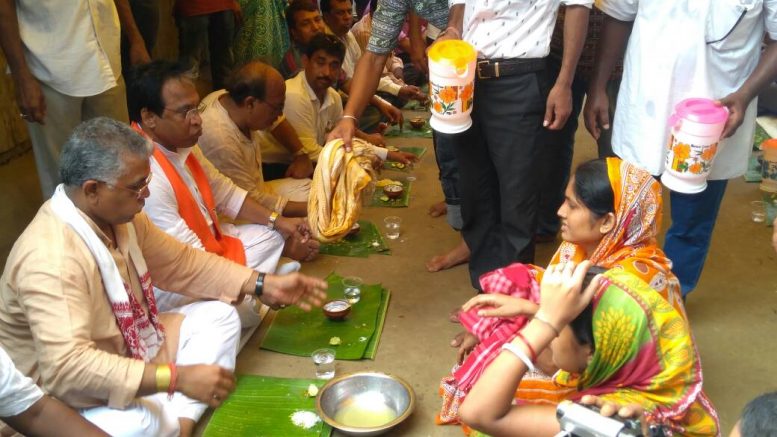 “She and her party colleagues set fire in the hills and have now left for plains paralyzing the normal life there. The situation had never been so volatile there during the past six years. But, the aggressive behavior of the chief minister has caused the anger among the people there and isolating them from the mainstream”, Ghosh alleged. Dilip Ghosh having lunch during Vistar Yatra programme in Bethuadahari

Advocating for talks with the agitating Gorkha Janamukti Morcha leader Bimal Gurung, the BJP president reiterated that that state government should come up with a positive mind and offer talks to settle the problem. “The state government leaving all political prejudices should immediately organize a talk involving the centre and the GJM as well so that normalcy could be restored in the hills”, he asserted.

Earlier the BJP president attended a party workshop arranged for the ‘Vistarak’, who have been closely working in the grass root level in Nakashipara block. As part of the party’s Vistar yatra, Ghosh had lunch at the resident of Ananda Ghosh in Muzaffarpur village of Bethuadahari. He also visited a number of houses and interacted with people appraising them about the development and welfare policies undertaken by the Narendra Modi led government at the centre.