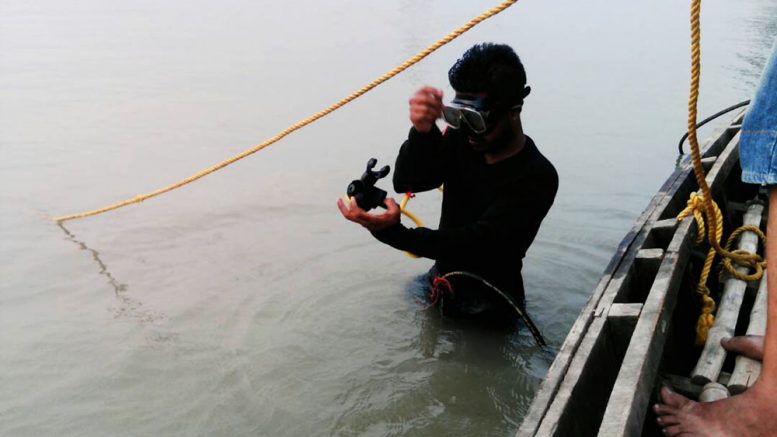 A diver busy in rescue operation. Picture by Palash Sarkar

Chakdaha, April 23: A group bath in the river Hooghly to video graph the event and to upload it to YouTube turned to be a nightmare to four Madhyamik examinees in Chakdah today as two of them were feared drowned, while two others were rescued by local villagers.

None of the four boys, who appeared in this year’s Madhyamik examination from different schools in Kalyani, know swim; nevertheless they get deep into the river just out of fun and for sake of video photograph.

Police have detained the two boys – Mantu Ruidas and Prakhar Biswas for interrogation who were rescued by the local villagers and two others senior companions, both first year students, who were filming the bath in their mobile phones standing on the bank of the river.

Police have started rescue operation engaging divers of civil defence, but no trace of the bodies could be found till late in the evening.

Sub divisional police officer of Kalyani Uttam Ghosh said: “All out efforts have been initiated to trace out the bodies. We have also made contact with the National disaster relief force for support. At the same time we have detained the four boys and questioning them about their actual motive”.

Local sources said that at about 2.30pm, six friends, who are all resident of Kalyani town, gathered at Char-Sarati ghat for an ‘in camera’ group bath.

Some Local villagers who were also taking bath in the river said that they boys were making fun in the water but suddenly slipped deep into the water and feared drowned.