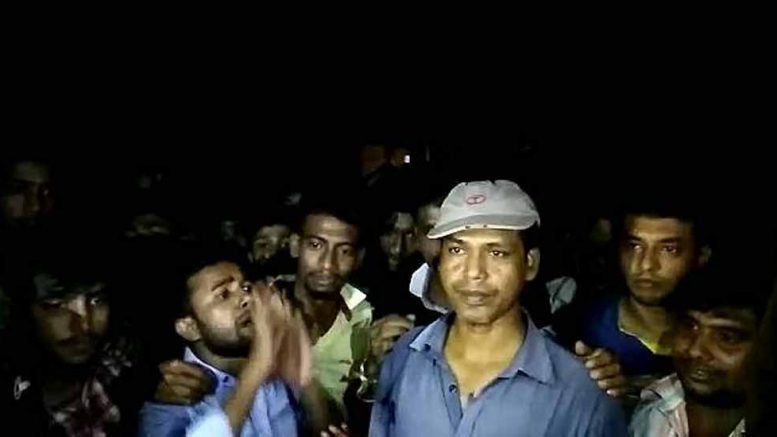 Taherpur, May 19: Train services in Ranaghat-Krishnanagar stretch was disrupted for about one hour after some civic policing volunteers led by a sub inspector of police beaten up the railway gate keeper of T-61gate in Taherpur and detained him at the police station leaving the gate to remain unmanned. Gateman Biswanath Dhali’s fault was, he told the cops to conduct their routine vehicle checking a little away from the rail gate as it was creating traffic congestion near the gate making it difficult to lock it on announcement of train arrival.

This made the civil volunteers and cops angered who first ruthlessly beaten up Dhali and later dragged him to a car and took away to police station leaving the gate open.

The incident sparked anger among the locals who blocked the Krishnanagar-Ranaghat road near the rail gate protesting the police atrocities and extortion. Locals alleged that policemen from Taherpur police station regularly extort money blocking the Taherpur rail gate in the name of checking and cause traffic snarl near the rail gate.

The gate was kept open for about an hour until Dhali was released by police being under pressure due to the road blockade. The blockade was also withdrawn only after returned as assured by the SDPO Ranaghat Amandeep.

Dhali said: “The cops were in routine vehicle check up when I advised them to go little backward as it was getting difficult to lock the gate on trains’ arrival. But, they became angry on my advice and greeted me with abusive language. When I protested they started beating me up ruthlessly and dragged me inside a vehicle and took me to Taherpur police station”.

Locals alleged that police regularly misuse their power and extort money in the name of vehicle checking. “Today also from the evening the cops were extorting money from the goods carriage specially, But this checking causing traffic congestion near the gate making it difficult to close it”, a local said.