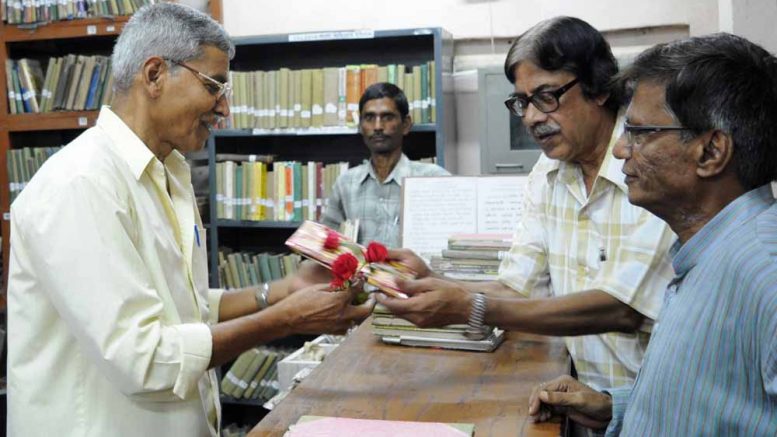 Krishnanagar, April 27: 68 year old Joydeb Roy of Nurripara in Krishnanagar cannot imagine a day in his life without a visit to Krishnanagar Public Library owing to his passion for books. With such irresistible love, the elderly man has been providing free services to library for over last 25 years. This selfless service, which he started while working as a clerk with Krishnanagar Municipality and continuing ever after retirement, got recognition on the world book and copy rights day early this week when some members of the library felicitated him with a bouquet of flowers, some books and sweets.

For the last 25 years Joydeb Roy has been attending the library in the afternoon almost regularly and rendering his services by lending books.

Moved by the gesture of the members, Roy said: “I just do this for my love for the library and the readers. I just wanted this library to survive with which so many great personalities like Dwijendra Lal Roy, Kazi Nazrul Islam, Pramatha Nath Choudhury, Karunanidhan Bandopadhayay, Hemchandra Bagchi, Bijoylal Chattopadhaya were once associated. I tried best to help and would be happy to do this till I die”.

For Joydeb Roy what once started as a help to the library suffering from staff crisis during early 1990 eventually become a passion.

A member of the library for last 53 years, Roy, who done his graduation with honors in political science from Santipur college, had started rendering his service when he was an employee of the assessment department of Krishnanagar Municipality.

State Government representative and executive committee member of the library Swadesh Roy, said: “I have been watching his selfless service for last 25 years. Such selfless service is rarely seen now”.

Earlier Joyodeb used to rush to the library and resumed his ‘duty’ at the lending section once his office closed at 5pm. He returned home only after 8pm when the library stopped transactions.

“Joydeb Babu has extended the duty time after retirement in 2008 as since then he comes by 1pm like regular staff and leaves at 8.30pm. He has suffered cardiac attacks, but that did not deter him to attend the library”, said Swadesh Roy, who is also a local library authority member of Nadia district.

KPL has now over 1200 members and nearly an equal number of readers who regularly visit the library which equipped with over 35000 books. The library has different dedicated sections for students, children, senior citizen, women and career guidance section for job seeking youths apart from the general lending section. But, only one librarian is posted to handle the daily pressure. The library has one duftry and a security guard, who are often engaged in handling daily transaction of books in absence of any library assistant.

“KPL is an ideal library in the district, but it suffers due to adequate number of staff”, an official of district library office said.

Former library assistant of KPL Sanjit Dutta said: “During 1991-92 the daily lending service was largely suffered due to crisis of staff. It became very difficult to meet over 1000 members who regularly visited the library for different purposes. During this time senior library member Joydeb babu and his friend Mihir Das came forward to help our staff spontaneously. Since then both continued their services selflessly, but a few years ago Mihir Babu passed away.

A library staff said: “Joydeb Babu has become an integral part of the library. We, however, never assign him any administrative task. He only helps in lending of books”