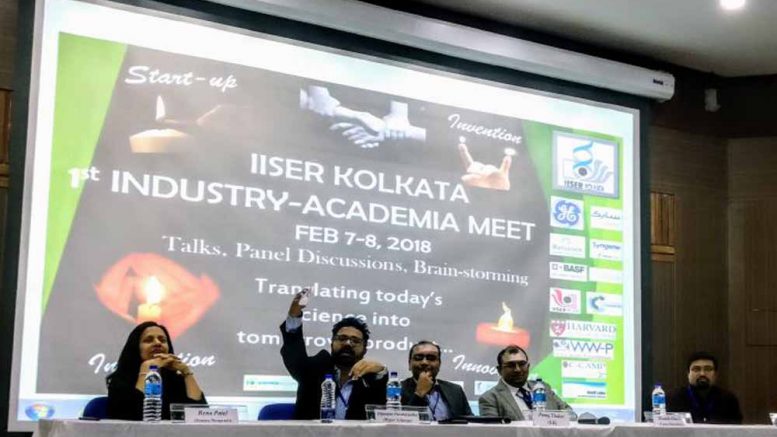 Mohanpur, Feb. 8: With an objective to facilitate a direct interaction between the academic community and the industry, the Indian Institute of Science Education and Research-Kolkata (IISER-K) organised ‘Industry-Academia’ meet, a first of its kind held at its campus in Mohanpur. The two day meet concluded on Thursday. Industrial giants like Reliance, GE, TCG Life Sciences, BASF, SABIC and Syngene International and others joined the meet explore the possibilities for direct tie up with the institute to channelize the results of scientific researches and experiments towards the market. IISER Kolkata’s Director Professor Sourav Pal said: “The core objective of the talk was to build a system for translating ideas from the laboratories to the market and to make policy to facilitate smooth industry-academia interactions”. The academia represented by IISER Kolkata director professor Sourav Pal professor S Sivaram, former director of NCL-Pune, professor KVR Chary, present Director, of IISER-Behrampur and others apart from a large number of students and researchers of the premier institute. The students of IISER-K presented start-up ideas before the industrial houses at the meet. “This was a unique event in a scientific institution where the academia and the industries spent two days in deliberations. I hope this will create an ecosystem for translation of research works”, IISER-K Director Professor Pal added.