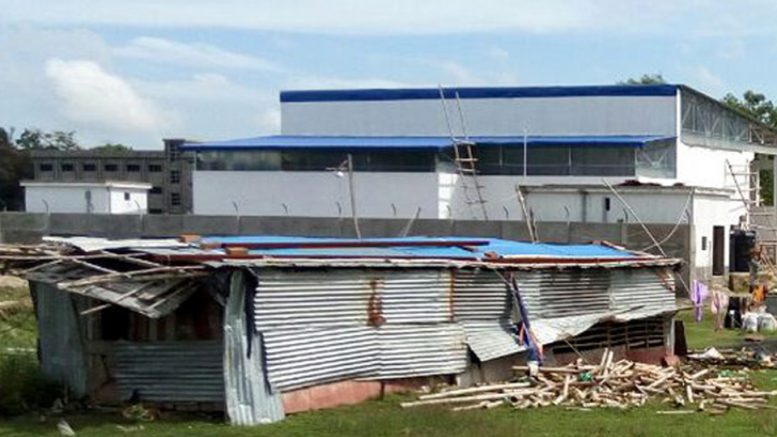 Nabadweep, Aug.7: The Hindu monks associated with International Society For Krishna Consciousness (ISKCON), Bharat Sevashram Sangha and 25 other Vaishnab Maths and organizations from Mayapur, Nabadweep and Swarupganj have made an appeal before union home minister Rajnath Singh to scrap a Rupees 4-crore centre-state jointly funded ‘abattoir’ (slaughter house) being constructed for Nabadweep Municipality on the banks of river Ganga in Nabadweep town as they alleged that it would jeopardize the sanctity of the holy town and also pollute the river Ganga.

In a written petition to the home minister Rajnath Singh and to Nadia District magistrate Sumit Gupta, the monks have termed this ‘abattoir’ project of union ministry of food processing industries as an “unholy initiative” and urged them to stop this ‘dubious attempt’ and ‘conspiracy’ to hurt the emotions of the entire “Sadhu Samaj” in Nabadweep town which is famous being the birthplace of Lord Chaitanya.

The monks discussing their course of action to protest construction of the slaughterhouse in Nabadweep on August 6 in Mayuapur.

Started from July 21, the monks on several occasions have met in Iskcon temple to plan their course of actions against the project including the latest held on Sunday in which they have decided to go all possible ways to stop it’s construction. A monk said: “We will try our best so that the project is scrapped ultimately. We have already appealed the union food processing ministry to stop this abattoir and also appraised home minister Rajnathji seeking his help in this regard”.

Jagadartia Das head of Iskcon run Dham Seba Samity said: “It is an appeal before the conscience to the administration to reconsider their decision keeping in mind Nabadweep’s holy identity as a pilgrimage. Such slaughter house in holy places like Puri, Vrindaban, Haridwar or Tirupathy could never be seen. We in the same way do not want it in Nabadweep.”

Swami Bashisthananda, a representative of Bharat Sevashram Sangha’s Nabadweep unit said: “It is unacceptable to allow bloodshed near to the Samadhis of Vaishnav saints Teenkori Goswami since the site is very near to it. Moreover a slaughter house on the birth place of Lord Sri Chaitanya, who was icon of non-violence, is unacceptable”

Union water resources and river development minister Uma Bharati also raised objection about the project in Nabadweep when she visited the town in June in connection with “Ganja Pujan’ ceremony.

Chairman of Trinamul Congress run Nabadweep Municipality Biman Krishna Saha, however, accused the BJP of prompting the monks. “The local BJP have been playing from behind using the monks, but they should know that their bosses from Delhi had granted fund. We took up it after many organizations approached us to stop open slaughtering”.

The objective behind setting up slaughterhouse is to provide infrastructure and scientific methods for slaughtering of poultry birds, sheep, goat and buffalo to encourage its meat production, processing, packaging, preservation and marketing of animal ‘by-products’ with value addition for potential markets for a better end product for consumers.

Rubbishing the allegation Bharati Maharaj, head of Saraswata Gaudiya Vaishnab Sangha of Nabadweep said: “We have no political association. Rather it is the Municipal authority which is deliberately misleading us. Initially claimed it would be a vegetable market, later claimed it as a fish market. In last month through a RTI petition we came to know it is being constructed for slaughtering cows, goats through halal method. We appealed the administration stop it, if they don’t listen we would move court”

BJP District president Ashutosh Pal said: “The issue has been raised by the monks of Nabadweep. We support their demand. It is UPA government project which the ruling party in Nabadweep kept under wrap apprehending protest. They always misled local people and never displayed a project details at the site of work to keep people in dark. We would launch a movement against this project and central leadership would join it.

During 2013-14, the UPA government approved this slaughter house for Nabadweep municipality on its appeal under the 11the plan. The NDA government granted fund for the project conceived under ‘Modernization of abattoirs’ scheduled to come up near Manipur ghat in Nabadweep.

Ministry of food processing industries conceived the project under 11th plan as part of setting up modernized abattoirs across the country which is aimed to provide infrastructure and scientific methods for slaughtering of poultry birds, sheep, goat and buffalo to encourage its meat production, processing, packaging, preservation and marketing of animal ‘by-products’ with value addition for potential markets for a better end product for consumers. The setting up of the plant would reduce illegal slaughtering, reduce pollution.

Chairman Biman Krishna Saha said: “At present animals like goats chickens are horribly slaughtered in open road which is unhygienic too. Our aim is to stop such slaughtering and to reduce pollution and to provide hygienically prepared wholesome meat to local population. No cow will be slaughtered here”

An official of ministry of food processing industry in Delhi said: “It is a service abattoir where animals are Local Trinamul MLA and minister Ujjwal Biswas speaking with the monks at an Iskcon temple in Mayapur on August 6.

to be brought by the local meat sellers for slaughtering and shall take away everything including offal leaving behind only dung, ingesta and blood. The abattoir would be having a capacity for slaughtering 50 large animals and at least 100 small animals in halal method under its 8 hours daily operation”

Nadia district magistrate Sumit Gupta said: “The Vaishnab monks met me and submitted a deputation requesting to stop the slaughter house project. I would look into the matter and try to find out an amicable solution”

Local MLA and state correctional services minister Ujjwal Biswas on Sunday met the monks and assured them that he would take necessary action so that no slaughter house is constructed in Nabadweep. He said: “We will send a proposal so that the newly constructed building could be converted into a vegetable market (Sabji Mandi). I have told Nadia district magistrate to take necessary steps for it”