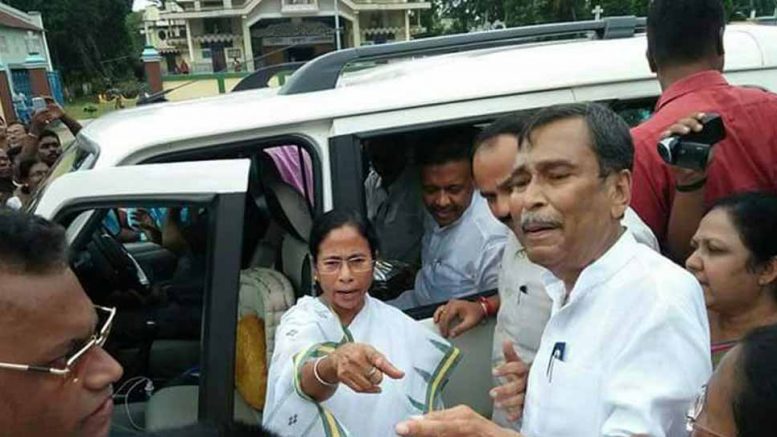 Krishnanagar/Ranaghat, Aug. 22: Chief Minister Mamata Banerjee today asked party leaders in Nadia to work as a united force to strengthen the organizational support base in a bid to defend the BJP in the 2019 lok sabha election. Trinamul supremo conveyed the instruction to the faction ridden leadership in the district before leaving Krishnanagar Circuit house where she spend the Monday night after visiting flood affected Malda district.

Chief Minister today took three breaks at different places on NH34 to meet the party leaders and workers on her way to Kolkata when she reiterated to work together as a united force.

She said the party leaders: “Work well as a team and always try to remain closer to the people so that no other political force could misled them”

On Monday night she talked to some top party leaders including zilla sabhadhipati Bani Roy, MLA Arindam Bhattacjarjee and others at the circuit house when she directed them to campaign about the success of the welfare schemes introduced by the state government.

She again took a break barely a kilometer away near Begopara Church in Ranaghat where she came out of her car and talked to senior party leaders like new entrant Sankar Singh, Gourisankar Dutta as well as with the newly elected councilors of Cooper’s Camp municipality.

Mamata Banerjee stayed in Begopara for about four minutes where a large crowd gathered to have a glimpse of their favourite leader. An effort to address the crowd, however, becomes futile due to malfunctioning of the microphone.