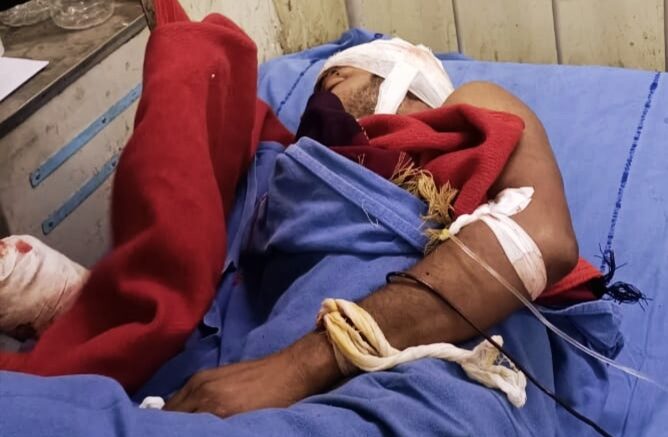 Chakdah, Jan. 4: The right palm of a BJP activist was chopped off by a group of miscreants under mysterious circumstances in the Shimurali area of Nadia’s Chakdah on Saturday night. The incident prompted the BJP leadership to accuse the Trinamul Congress of its suspected link even though the family members are not sure enough if the attack was due to any political reason.

Victim Ratan Burman, 38, a resident of BT College Para, is a booth committee president of the saffron party. The bizarre incident occurred near his home when he was returning there at about 11 pm. Police and local sources said that Burman, a fish trader, suffered multiple injuries including on his head, eyes as the miscreants attacked him with a sharp weapon before chopping off his right palm and fled away with it. Some local residents found him lying in a pool of blood and rushed him to JNM Hospital in Kalyani. Hospital sources said that his condition is quite critical as he remained unconscious till Sunday evening.

Police have begun a search for the chopped palm in the area. But, till Sunday evening the sleuths failed to trace out the organ.

The Nadia BJP leadership has alleged Trinamul’s hand behind the attack, while the police which began a probe on the basis of a complaint of his wife has indicated an ‘apolitical’ reason for the attack.

Angry BJP supporters blocked the Shimurali station road demanding the arrest of culprits for about an hour earlier during the morning.

Smriti Burman, wife of the victim said, “My husband is an active BJP activist and heads a booth in the area. But, it is not clear who attacked him. Before went unconscious he just told me that miscreants attacked him from behind when he was entering home opening the gate. The miscreants injured his eyes first by fingers and then dragged him a little away where they attacked him with sharp weapons and chopped off his palm. I am not sure whether he was attacked for a political reason”.

Pankaj Ghosh, vice president of BJP’s Nadia south organizing committee, however, claimed Trinamul’s role in the attack. “The ruling party has engaged its loyal miscreants to unleash fear among our party activists as part of its strategy to weaken our organization. Ratan is an active worker if our party and earned the wrath of local Trinamul leadership”.

Trinamul’s Nadia Zilla Parishad member Tibrajyoti Das ruled out the allegations of the party’s involvement behind the incident, said, “We don’t believe in such heinous act to settle political differences. We fight politically…but BJP blames us for political benefit out of such a bizarre incident”.

An investigating officer of Chakdah police said, “We have begun a probe and examining all possible aspects. Preliminary investigation indicates the victim has personal enmity for apolitical reasons. However, nothing can be conclusively said until his health condition improves and we could question him”