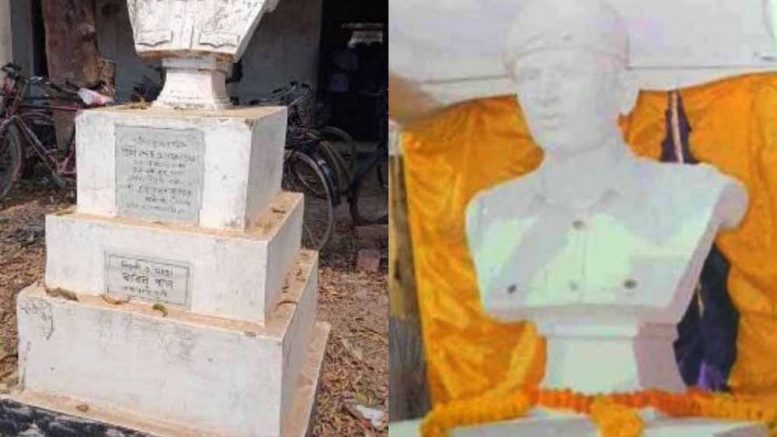 Martyr Premananda Chanda: The damaged bust and the actual one

Kaliganj, Feb. 22: The students Sapjola Deshbandhu high school in Nadia’s Kaliganj were burst into anger on Thursday as unidentified miscreants on Wednesday night entered their school campus and allegedly vandalized the bust of Premananda Chanda, a former student of their school and a sepoy of the Indian Army’s artillery wing, who sacrificed his life in the Kargil war. As the students boycotted their classes, embarrassed school authorities called the police and lodged a complaint at the Kaliganj police station. Based on the complaint, the police registered a case against unknown people and launched a hunt. However, it appears to be clueless about the motive behind the incident.

A shocked Biswadeb Chandra (74), ailing father of the martyred soldier, said: “I do not know who are involved behind it. They did not insult my son; they were disrespectful to their motherland”.

A resident of Sapjola, Premananda Chanda passed out from the school during early 90s. He joined Indian army during 1997. On June 3, 1999 he died in Pak firing while trying to cover up the Indian soldiers during the Kargil battle.

A year later, the school authority as its mark of respect to this brave former student decided to install his bust on the occasion of the school 40th anniversary along with that of Deshbandhu Chittaranjan Das.

School’s former managing committee secretary Haridas De said: “The bust was installed as per the collective decision by the school authority and local residents. We were all proud about Premananda’s sacrifice. His bust was installed along side Deshbandhu. Moved by our initiative artisan Bablu Pal of Ghurni made the bust free of cost. Former district magistrate S.Suresh Kumar had unveiled it. But, today I felt ashamed when learnt that bust of this brave solder was vandalized”.

Supriya Pramanik, a class ten student of the school: “It is beyond our imagination that bust of soldier, who sacrificed his life to protect our country could be vandalized in such way”.

Head mistress of the school Sushma De Nandy said: “The students have genuine reasons for grievance. I personally felt ashamed today. I could probably digest if anything is stolen from the campus. But, the miscreants have some other ulterior motive, which I urged the police to find out”.