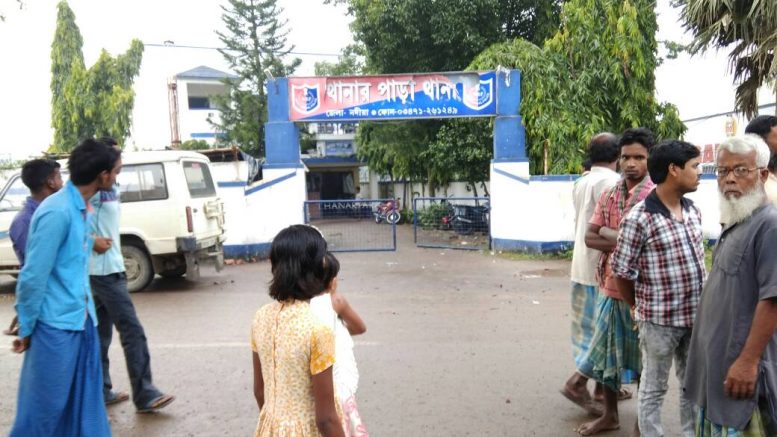 Thanarpara OC Animnesh Kumar De and one of the tear gas shell those police lobbed at the agitators.

Thanarpara, June 20: A violent mob today ransacked residence of a police officer in Nadia’s Thanarpara, torched a police vehicle and two motorbikes after he allegedly beaten up a youth and detained him because his voice interrupted his delayed siesta.

The youth happens to be a cement dealer and the brother of the landlords at the first floor of whose house the officers stays on rent. At the ground floor of the youth has a cement godown, where he was speaking to a driver when the officer lost his cool due to interruption of his siesta and beaten up the youth The situation turned so volatile that the cops failed to rescue the accused officer Animesh Kumar De, a sub inspector, who was kept ghearaoed by the mob at his resident for about five hours and police could not disperse them despite a lathi charge and firing at least 20 rounds of tear gas shells.

The accused officer could only be rescued after senior police officers rushed to Thanarpara, released the victim youth identified as Sadiqul Ali Mondal and apologized for his behaviour while assuring action against him.

As per the demand of the locals, the district police administration would also consider removal of the accused police officer and at the same time would initiate no case against the villagers for their rampage that caused damage to government properties.

Meanwhile, soon after release from the police station, Sadiqul, who suffered injuries on his face, chest, hands and legs due to thrashing by the police officer, was rushed to Karimpur rural hospital for medical treatment.

Police offered his family the cost of treatment, but they refused it.

Earlier trouble broke out at about 6pm when Sadiqul having an altercation while unloading truck with the driver of Ramco cement company that delivered damaged bags today.

Sadiqul said: “I was unloading the truck at my godown. But, I became annoyed on the driver and other staff of the vehicle as they brought water soaked damaged packets of cement. I became little angry and talking to them in loud voice. During this time OC Animesh babu , who lives on the first floor of the building, came down and started beating up me with abusive languages. I introduced myself as the brother of the landlord and a businessman. But, he listened nothing and continued kicking and punching me. Later he dragged me to the police station, around 100-meter away and put me inside a lock up and beaten up me again a with stick”.

The incident occurred a little before the locals gathered at a nearby mosque for the evening prayer before the iftaar.

As the news of ruthless behavior of the police officer spread in the area, the locals turned angry and gathered at the police station demanding Sadiqul’s unconditional release with apology of the officer in charge. But, as the duty officer refused to oblige them, the locals rushed to the OC’s residence and started the rampage.

The mob asked the police officer to come down and seek apology. But, the officer could not dare to come out in front of the violent rampaging mob. The mob during this time entered the police barrack, located opposite to police station and torched a Tata sumo and two bikes of civic volunteers who allegedly helped the officer to beat Sadiqul. The police vehicle of that was torched by the violent mob

A police team arrived at the spot fired tear gas shells and started lathi charging, but failed to bring the situation under control.

Khedmat Mondal, elder brother of Sadiqul, who is also Karimput-II block president of Congress said: “It was natural outburst of the peoples’ anger. My brother had committed no crime. He was doing his business. It appears that the officer beaten up him without any valid reason only to flex his arms. He came angry as his voice disturbed his sleep. The locals were furious about the behaviour of the OC who even few days ago ransacked house of a person during a raid. He never behaves with people properly. As a result, today locals demanded his removal from the police station”.

“I would be happy if he leaves my house at the earliest. Earlier several police officers posted in Thanarpara police station stayed in my house on rent and I never had such a bad experience with them”, Khedmat added.

During the truce meeting that was held at the police station local Trinamul leaders present there had also demanded removal of the officer in charge.

“We would appeal the district leadership to ensure that such a bad officer is removed from the charge of a sensitive police station”, a Trinamul leader said.