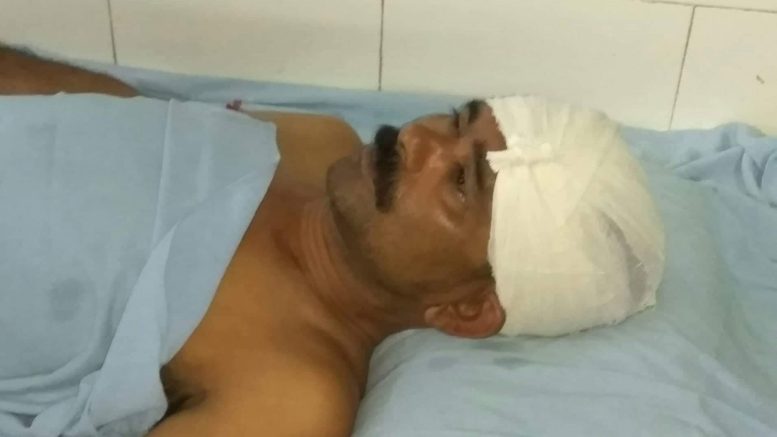 Chakdaha, Aug. 1: A Trinamul activist in Nadia’s Chakdah escaped an attempt on his life on Wednesday night when he protested against some of his party men uttering filthy language while consuming alcohol in a locality. Dipak Poddar (46), a temporary worker of health department of Chakdah Municipality, who is also Trinamul’s ward committee secretary in Rajbagan para of the town, was allegedly attacked with iron rods and sharp weapons by a gang of about ten youths, who allegedly close to a rival faction of the party. Dipak Poddar, who is a close aide to Chakdah Municipality chairman Dipak Chakraborty, hit by iron rods on his head repeatedly injuring him severely until he became unconscious. Some youths of a local club, rescued Poddar and took him to Chakdah state general hospital, where he was given 12 stitches on his head. The local residents chased the miscreants and caught one of them and handed him over to police. Poddar on gaining consciousness later lodged a complaint against ten Trinamul activists at the Chakdah police station. Police, however, so far arrested two persons in connection. Poddar said, “My fault is that I am loyal to Municipality chairman Dipak Chakraborty and protested against unsocial activities encouraged by party’s youth wing leader Sadhan Biswas. So they attacked me. It was a pre-planned attack to kill me, but I escaped luckily as the local residents saved me. A few days ago they attacked me and in same way attacked on Wednesday night. But, police so far had done little to arrest the miscreants”.