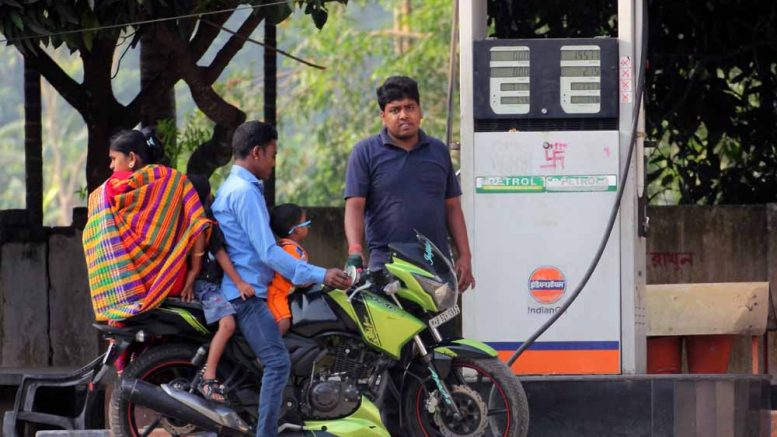 A pump worker refueling a bike with its riders appearing without helmet. Picture by Abhi Ghosh

Krishnanagar, April 24: Rules are made to breach. At least the motorcyclists in the state have proved so with the support of a large section of the petrol pump owners.

The much hyped road safety initiative for the motorcyclists to use helmet launched by the state government on July 8 last year titled “No helmet, No petrol” appeared to have no takers as most of the petrol pumps across Nadia have resumed refueling bikes despite the riders not using helmets.

While the rule introduced by chief minister Mamata Banerjee instructed for strict adherence, the districts depicts scenes of large-scale violations with police preferred to remain blind after initial alacrity.

In Nadia during January to March at least 15 bikers were died in road accidents, all of whom were riding without helmet.

Angry over the issue the Nadia police have started random raids at the fuel stations.

Additional SP (Kalyani) Swati Bhangalia said: “We are trying our best to create awareness among the bikers as well as the petrol pump owners who have a great role to play to make the government’s initiative successful”.

A police officer said: “We would soon start prosecution against errant petrol pump owners and charge them under 186 of IPC (Obstructing public servant in discharge duty)”.

Mohanlal Srivastav, a HP petrol pump owner in Chakdah said: “Government’s initiative is very good, but it is quite tough for petrol pump owners to implement it. The bikers often become violent and beat up our workers. I lodged complaints with police, who posted civic volunteers. But, they were also beaten up on several occasions and eventually withdrawn by police”.

Nadia District magistrate Sumit Gupta said: “The petrol pump owners cannot be blamed only. It is a collective responsibility. The issue needed to be solved socially through awareness”.