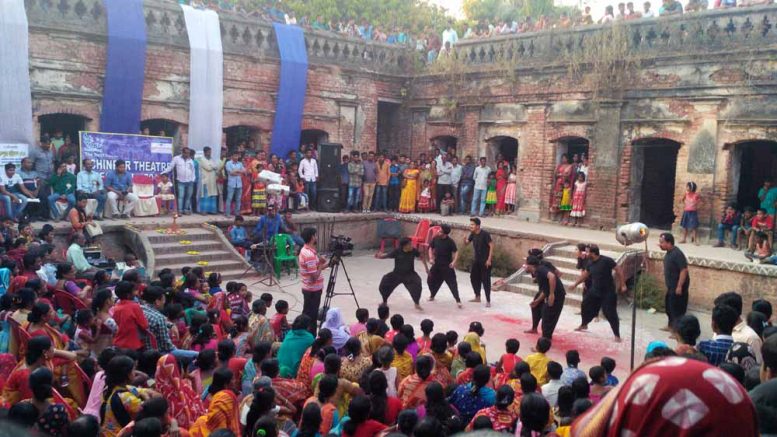 A play being staged at the courtyard of Roy Mansion in Chakdah.

Chakdah, March 11: A Calcutta based theatre group on Saturday began an initiative in Banamalipara village of Nadia’s Chakdaha to bring a cultural change among the residents in a remote tribal village where drinking country liquor is synonymous with entertainment at the end of days work. As the abandoned zamindar mansion in the village became den for the drunken youth and old, members of ‘The Nest’ converted it into a proscenium organizing an ‘alternative’ theatre festival to inspire local residents to try for a change in their evening schedule.

The initiative was launched by actor Nigel Akkara. The experiment by the theatre group appeared as catalyst for a change among the villagers as eventually over one hundred youth later vowed to quit their drinking habit and approached the theatre group to help them to develop their cultural habits.

The Nest members involved six theatre groups into their initiative, who staged small plays, at 250 years old abandoned ‘Roy Manson’, where over two thousand villagers gleefully watched a different show for the first time in their life.

Moved by the approach of the local youths, Abhijit Anukameen of The Nest said: “This is beyond our expectation. We just tried to make a change in their evening palate. We tried to tell them stories of their struggle filled with joy and sorrows so that they could easily relate. We are lucky as our initiative worked well as they responded spontaneously before we could conclude”.

The Roys’ house was abandoned around 75 years ago. The archaic building located on a sprawling three bigha land has no caretaker while the owners shifted to cities leaving the house. The dilapidated building being gradually ceased off its existing over the years, while the local people mostly belong to tribal communities have developed it as their drink place.

“The building has become a barrier of social and cultural development among the children in the village. As the people in the village mostly belong to working class with no education, they use evening for entertainment by consuming liquor at the abandoned house. Some unscrupulous people to exploit the opportunity do sale liquor there. Most of the children in the locality are first generation learner, but they have been suffering a cultural drawback”, said Susmita Mandal, a homemaker in the adjacent area.

A youth, who works as a farm labour said: “We work hard everyday and at the evening we try to relieve us from tension by drinking liquor. We have no other option for entertainment. But, today we got a new taste and realised that there is life beyond this”. Local residents like Ajit Sardar, Rafiqul Mandal said: “For over years the house earned an identity as ghost house. But, unsocial elements exploiting this to ruin the culture here. Local administration never shown any concerns about it”

Tarun Roy, a member of present generation of Roy family said: “There are many claimants of the building. But, none is interested to repair the house for which it is being ruined gradually. Local people also exploiting this opportunity to misuse it. But, I am hopeful after today the situation will change”.

When heard about the issue Abhijit Anukameen of The Nest, who has roots in Chakdah, proposed an initiative for ‘awareness’ drive and to motivate the youth for a change.

“Our objective was to motivate the local youths. They might be not much educated, but we had faith that we would be able to touch their hearts. We started working with them around a month ago and said that life is more entertaining, if they really want to enjoy” – Anindita Das, President – The Nest

Nigel Akkara, who was once arrested for a crime and often termed as an ambassador of change said: “It is a great initiative. I am happy to be part with the initiative. I will come again and help the local youth to overcome the cultural barrier whenever they would invite”.