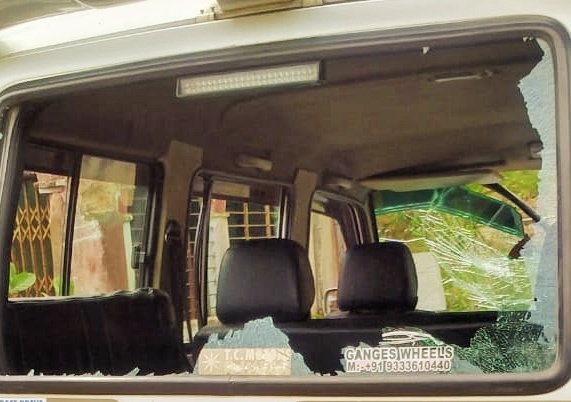 Hogolberia, May 13: A section of villagers in Kuchaidanga of Nadia’s Hogolberia turned violent and attacked the cops on Thursday morning when they were allegedly beaten up by police for not wearing face mask.

The angry mob vandalized at least three police vehicles of Hogolberia police station and injured five policemen as they hurled bricks in retaliation. The injured ops were taken to Karimpur rural hospital, but released after primary treatment.

On the other hand, two persons identified as   Newton Akhtar Khan, 27 and Masuda Biwi, 32,  seriously injured in police lathi charge, who were taken to Berhampur medical college hospital, villagers claimed.

The incident occured at about 11.30 am when a team of Hogolberia police was carrying out an awareness drive in the village asking people to wear face masks in an attempt to enforce the Covid safety measures. The local police team was accompanied by central police team.

Local sources said that the villagers turned violent as police began random lathi charge on the village road injuring innocent villagers, many of whom had masks on their face.

“People were panicked when police began chasing them on car at a high speed. They were thrashing people with sticks mercilessly when a man who had mask was injured..Police did not spare even the women. It was not the central police, rather the local police thrashing us”, said a resident of Kuchidanga.

“Police also beaten up a youth who was taking rest at home after Roja….Masuda Biwi, a home maker also experienced the police brutality in the name of awarenes and had to be hospitalised.” a villager claimed.

Police officials, however, refuted the allegations. “Some people, who were roaming on the road without wearing masks, begun argument with the police officials apparently refusing to obey safety measures. The argument eventually turned hot when the setion of the villagers attacked the police team and incited tension in the area. It was an unprovoked attack only because police officials tried to enforce Covid safety protocols as per government order and advices of the health care agencies”, a senior police officer of Krishnagar police district said.

Police, have meanwhile started a case for the alleged attack and vandalization of the vehicles. But, till evening no one was arrested.