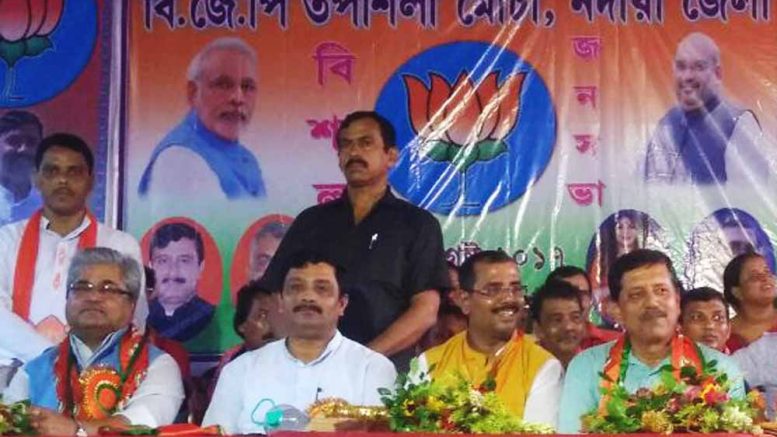 Rahul Sinha at the rally in Bethuadahari. Picture by Pranab Debnath

Bethuadahari, Aug. 26: BJP national secretary Rahul Sinha today came down heavily on the West Bengal government for its decision not to allow immersion of Durga idols on October 1, because Muharram has fallen on the same day. The former president of party’s Bengal unit termed the decision announced by chief minister Mamata Banerjee as “unconstitutional” for which the BJP would take the issue to court.

While speaking at a public meeting in Nichubazar football ground in Bethuadahari organized by the party’s Nadia district unit, he also stated that apart from taking legal resort, the party would appeal the puja organizers across the state to raise voice against the decision of the state government.

“This is a double standard on the part of the chief minister as she speaks about communal harmony, but leaves no opportunity to create division among the Hindu and Muslims”, Sinha said.

On August 23, the state government directed the police in the districts to convey the decision and also advised the SPs to talk to the puja committees to finalize the date and time of the immersion rallies on September 30, the Maha Dashami. Generally most of the community puja committees and clubs immerse Durga idols on the Ekadashi. But, this time the state government announced that there would not be any immersion of Devi idol being it Muharram.

The BJP leadership criticized the decision accusing it “arbitrary” and an attempt to appease the Muslim community for sake of vote bank.

Addressing the party supporters, Rahul Sinha said: “We will go any length to make this order null. Such unconstitutional order would”