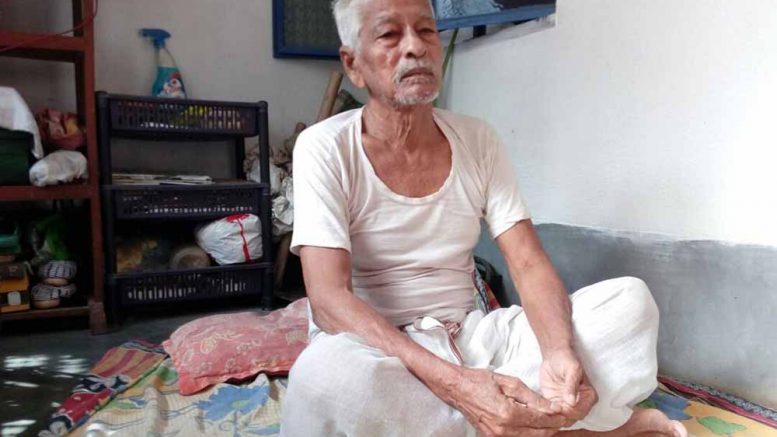 Gayeshpur, Oct. 24: A helpless 75-year-old man has requested the Kalyani Police and the sub divisional officer of Kalyani to get him justice as he has been brutally beaten up and thrown out of his own house by his youngest son and daughter-in-law because he refused to make him the sole owner of his residential house and his paltry bank savings.

The accused son Bablu Hore, a salesman at a shopping mall, did not even spare his mentally challenged elder son. The accused son has also beaten up his elder daughter, who stays nearby, because she provides them two square meals regularly after he stopped giving him food.

A retired employee of Kalyani Spinning Mill, Dulal Hore, a resident of Gayeshpur Golbazar has lodged two complaints with Kalyani police station with the latest on Sunday, but the police so far did not bother to start a case against the son even though the Supreme court made it a mandatory legal obligation for children and heirs to provide maintenance to senior citizens and parents under Maintenance and Welfare of Parents and Senior Citizens Act, 2007.

Nadia Police superintendent Sheesh Ram Jhajharia, however, assured action into the matter. “I will look into the matter and take suitable legal action”, he said.

However, with no immediate help from police is visible, Dulal Hore has taken shelter to a neighbor’s house. He lodged a separate complaint with SDO Kalyani.

Dulal Hore is often beaten up by his youngest son Bablu. He slaps him, thrashes him with sticks. In a recent occasion he put a TV remote control set into his mouth to gag him।

“My only fault is that I refused to deprive my mentally challenged elder son Biplab and three daughters, who got married but not financially very sound. My youngest son Bablu wants to get my residential house and some left out cash in his name, which I denied”, said Dulal Hore.

Local sources said, trouble began for Hore a few years ago after marriage of his third daughter when Bablu started creating pressure on him to make him the owner of the residential house.

“After retirement I became financially incapacitated as there was no. So I fully became dependent on my son. But he and his wife started mistreating me as I refused to agree to their demands. They soon started torture on me physically. Thrashing with sticks, slapping and punching have become regular affair for about an year. A few days ago he put a remote control TV inside my mouth to gag me. I silently digested everything because if I leave they will kill my mentally challenged son. But, during the past few days it became unbearable”, Hore said.

Sikha Acharya, elder daughter of Hore said: “My brother Bablu and his wife Sabita have been torturing my father and elder brother since long. They do not give food. I came to know about their ordeal and started providing them meals regularly. But, he had beaten up me threatening to kill my son if I dare to give them food.”.

Accused Bablu, however, refuted the allegation. He said: “My sisters making conspiracy against me misleading my father for their vested interest”.

Kalyani SDO Swapan Kundu said: “I have heard about the incident and take action after an early hearing”