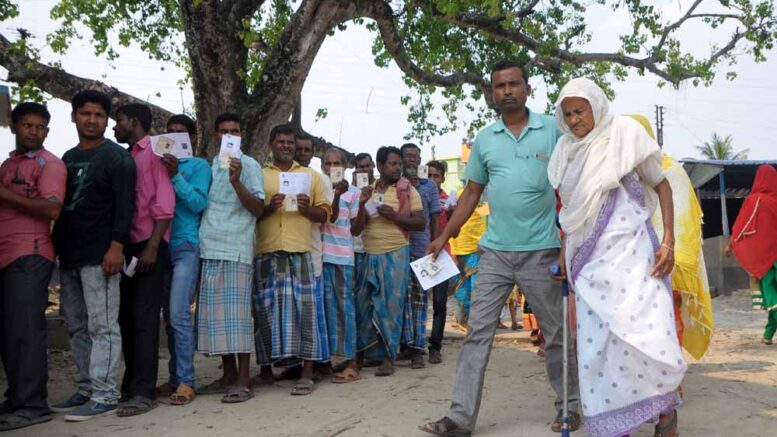 Kolkata/Santipur, Jan. 20: Elderly people in Bengal aged 80 and above and those with physical disabilities for the first time will be able to cast their votes through postal ballot sitting at their home in the ensuing assembly election likely to be held during April-May this year.

The postal ballots are so far issued only to “absentee” voters who are unable to visit the polling stations due to their professional obligations being attached to armed forces and government officials assigned polling duties.

The move that has been initiated apparently to increase the voters’ turn out is actually based on an amendment of Conduct of Election Rules, 1961 done by the Ministry of Law & Justice during October 22,  2019 which introduced postal ballot facility for people aged over 80.

The facility was first introduced in the Jharkhand assembly poll during November 2019. The amended provisions of postal ballot facility will be applied for the first time in Bengal in the ensuing assembly poll.

The Ministry of Law last year has further amended the provision of the Rule extending the postal ballot facility for voters aged over 65 as well as to the Covid patients recuperating under institutional or home quarantine. But, so far, district returning officers in the state have been issued orders to make necessary arrangements to provide postal ballot facility only to the people aged over 80 and physically challenged.

Nadia District Magistrate Partha Ghosh said, “With the introduction of this facility elderly people and physically challenged people will be able to cast their votes”.

An official of state election commission said, “In every election a good percentage of voters fail to turn up at polling stations as they cannot move independently or even stand in the queue due to fragile old age or physical disability. In some cases such aged or physically challenged voters take support of other people to cast votes. In such case the person helping such voters need to submit an undertaking in a prescribed format. But on many occasions political agents raise objection questioning the integrity of the person accompanying such voter. The new postal ballot facility will help to avoid such problem in maor way”.

“Apart from increasing the turn out reducing the numbers of absentee voters who do nit turn up due to fragile health and disabilities, this initiative will also become helpful to discourage vulnerable elderly people to venture out in the pandemic situation”, the state EC official added.

Welcoming the new facility, Nadia District Magistrate and District Returning Officer said, “In the new system a form (12B) will be issued to such voters prior to poll which will be handed over by the commission officials visiting their respective homes. Through this form such voters would opt whether they would like to cast their votes at home or at the polling stations. If they opt to cast vote at home, a poll officer will visit their home on a designated day as announced by commission along with a voting compartment accompanied by two other officials, police team and a video photographer to get thier votes casted on the postal ballots”.

“Once the voting is done, the poll officer collect the ballot from them before the returning officer”, added the Nadia DM.

Sunil Dutta, 86, a retired state government officer and a voter in Kalyani said, “This is great humane approach adopted by the Election Commission, which will help to reflect people’s opinion in a stronger way”.