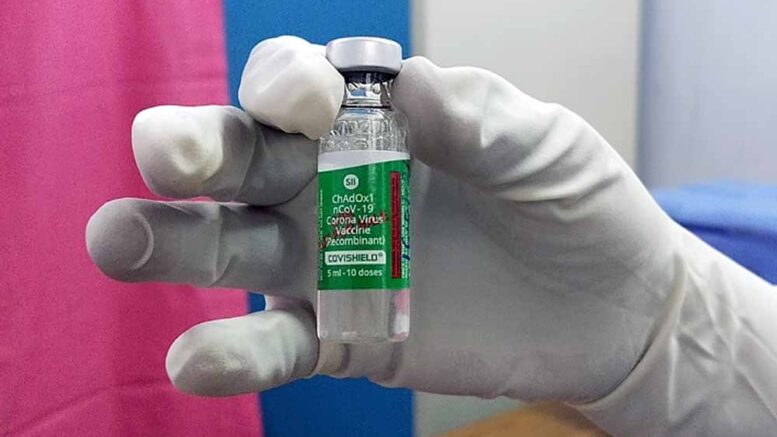 A 5 ml vial of Covishield being checked before vaccination

Krishnanagar, Jan. 16: The much awaited anti Covid vaccination drive begun across the country on Saturday nearly a year after the disease was first reported in Kerala. The vaccination in Nadia begun along with the other parts of the country with the formal announcement of Prime Minister Narendra Modi, who also announced that the centre aimed to vaccinate 1 crore health workers and 2 core front-line workers in the first phase.

In Nadia 1000 health workers were registered at 10 facilitation centres each with 100 numbers for jab on the first day. However, till end of the day only 492 persons turned up to receive the much awaited vaccine. None of the recipients developed any side effects. All the recipients will get two dozes of the vaccine. Those who were administered the vaccine will be given the next dose after a gap of 28 days.

The vaccination drive would resume again from January 18 with a schedule of four times a week from 9 am to 4 pm. However, as announced by the centre earlier the ongoing drive would only be remained restricted for the health workers. The public vaccination drive would begin only after the other categories of people like elderly and the vulnerable ones are administered with the vaccine. The centre would make specific notification for public vaccination initiative and all the beneficiaries would then be required to register their names for the vaccine through the CoWIN app launched by the Ministry of Health as the single monitoring system for it.

Each of the beneficiaries was administered 0.5 ml “Covishield” vaccine, which was assigned for Nadia. The vial of the vaccine contains 5 ml – which in other term means 10 doses to administer to 10 recipients.

attendants like sweepers, ancillary workers were provided priority to get the vaccine since they work in close contact with people being the front line heath care personnel. “Our objective is to get these persons immuned first so that once the public vaccination would begin, they could be used as the main work force with confidence”, said a health department official.

In Nadia Krishnanagar Sadar hospital and Bishnupur rural health centre recorded the lowest turnout each with only 24 recipients, while Karimpur rural hospital recorded the highest turn out with 80 health workers received the vaccine. The Santipur state general hospital comes second with 73 followed by JNM Hospital where 70 health workers received the first jab.

Out of the 492 health workers, a health worker suffering from chronic myeloid leukemia (CML)was administered the vaccine. Ashis Kumar Naha, head clerk of the Ranaghat sub divisional hospital, who has been suffering from CML since 2016 took the vaccine without any reluctance and also encouraged his colleagues to be vaccinated.

However, the senior health department officials refused to speak about any possible reasons behind the apparent low turnout in Nadia which comes only around 49.2% by the end of the prescribed deadline. A senior doctor with the community medicine wing later claimed that a large section of the health workers appeared to be reluctant to receive the vaccine on the first day with confusion about its efficacy and side effects in their minds.

“Many of the registered beneficiaries came to the facilitation centres today, but did not receive the vaccine. It appeared that they are quite reluctant and apprehensive about the outcome and efficacy of the vaccine. They closely monitored the condition of those took the vaccine today and intersected with them inquiring about reaction after vaccination. Since the vaccination is a matter of solicitation we did not put pressure on any of them. Hope they would soon clear their prejudices and come up to receive the vaccine”, a senior health official told NfN.

Meanwhile, a group of 25 Accredited Social Health Activists (ASHA), the grass root level community health workers could not get the vaccine since their names were not enrolled as the beneficiaries. These ASHA workers attached to the Birnagar Municipality were sent to Ranaghat sub divisional hospital by the health officer for the vaccination without confirming their inclusion to the list of registered beneficiaries.

ACMOH, Ranaghat Pushpendu Bhattacharyya said, “It was flawed communication on the part of the Municipality. They sent the ASHA workers without confirming their registration. None of the ASHA workers received any text message in confirmation of their registration and time schedule for the vaccination. Nevertheless, they were sent to take the doze. It was unwanted harassment for them. However, once registered they will be vaccinated as per the prescribed protocols.