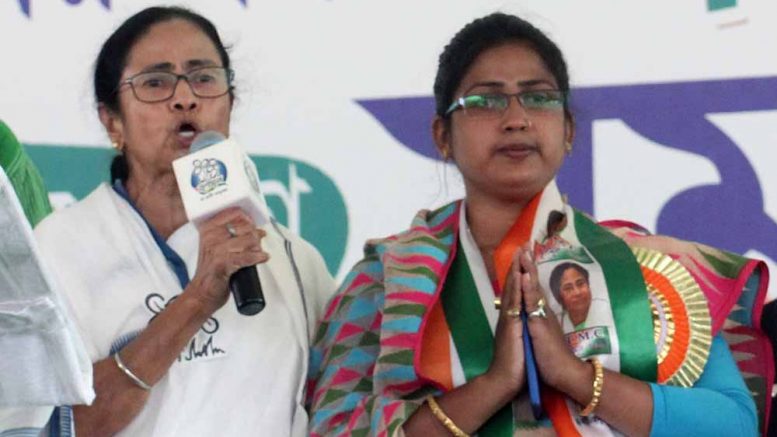 Kaliganj/Bogula, April 20: Trinamul chief Mamata Banerjee on Saturday added a new narrative for Prime Minister Narendra Modi terming him as a ‘Jhuta Chowkidar” who does not respect emotions of the countrymen and at present suffering from ‘haratanka’ (phobia of defeat) knowing that his defeat is a foregone conclusion.

She said, Modi would get big zero from states like Uttar Pradesh, Rajasthan, Delhi Punjab, Odhisa and as such now speaking rubbish every day. This has created a fear of defeat in him”.

Speaking at an election rally in Nadia’s Bogula she said, “It is nearly certain that his party would lose the polls. Knowing this he has been trying to win the poll by dividing people, but I will not make it possible”. “I shall fight against the BJP at every inch to ensure his defeat and pave the way for a Government at the centre with other political parties. I shall never make any compromise with BJP”, she said with confidence.

“He is now suffering from haratanka and uttering nonsense every day, in fear of certain defeats in Uttar Pradesh, Rajasthan, Delhi, Punjab, Andhra Pradesh, Gujarat, Odisha – 190 seats between them — and elsewhere,” she said.

Accusing Modi of lying and misleading the countrymen,   she termed Modi as “Jhuta Chowkidar”, who has very little idea about Bengal. Referring to an attack by Modi in Balurghat earlier in the day, where he accused her of doing nothing during her term as union railways minister, Trinamul supremo said, “Modibabu should check facts before speak and should not rely on his state leaders who have practically no idea of her contributions”.

She urged people to give befitting replies to such “lies” of Modi. She specifically appealed young and new voters not to waste their votes by supporting Congress and CPM, apparently urging them for consolidation of support of non BJP opposition.

Urging the young generation to vote for Trinamul, she said, “This election has brought an opportunity to you to take part in formation of government. You can join in this endeavor by ensuring victory in 42 seats. If Trinamul can get the opportunity to form a government at centre, it will bring peace unity and integrity in the country”.

After her speech in Bogula, she walked about 4km in a road show and interacted with people  while seeking vote for party candidate Mohua Maitra. She begun walk from Beldanga more and concluded at Kadamtala ghat.

On Sunday she would speak in two meeting in Gayeshpur and Habibpur and also participate in a road show in Santipur.