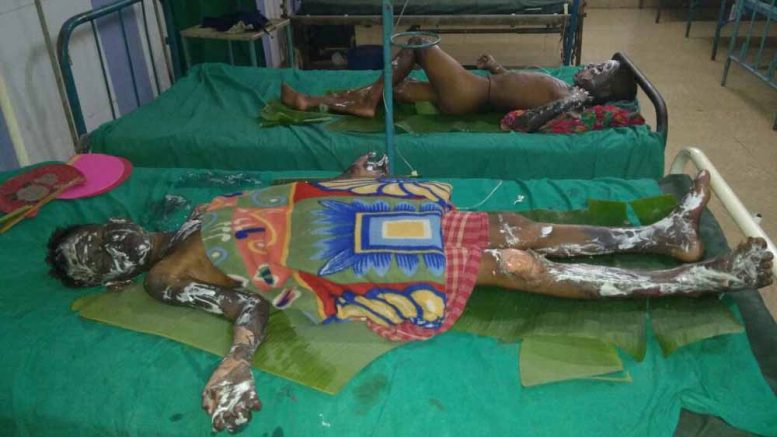 The injured victims at Saktinagar district hospital in Krishnanagar.

Chapra, July 16: A frantic search for pigeon met with fatal end for four boys when they were critically injured as bomb kept inside a cage went off in Tentulberia village of Chapra on Sunday evening.

Mustafa Sheik (13), Muqbul, Hobittal Sheikh and Sahib Sheikh all aged 9 were admitted to Saktinagar district hospital’s burn ward with over 80% burn injuries. The incident occurred when the four boys entered inside an abandoned house and frantically searching for pigeons as they witnessed some birds entered the house.

Sources said that the abandoned house actually owned by a local Trinamul activist, who used to work as agent of a fund raising company and left the village after investors started pouring demanding their money back. The locals alleged exploiting the situation some local miscreants has made it a den of antisocial activities with the support of local leaders of ruling party and by support of police. Police have started a case into the incident.

An investigating officer said: “It is not clear who kept the bombs there. We would try to find the persons involved behind the bombs”