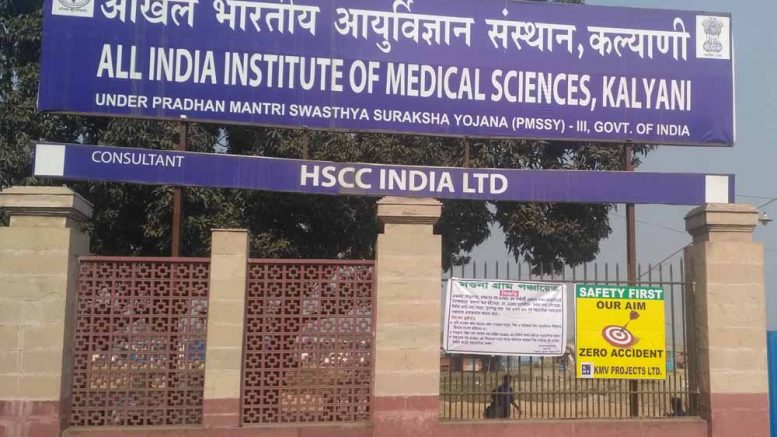 All India Institute of Medical Science Site In Kalyani

Kalyani, Jan. 20: The All India Institute of Medical Science (AIIMS) would begin its functioning in Kalyani by inaugurating the “out-patient department” in February next year. While the functioning of the entire Rupees 1754-crore project would take at least three more year, the centre has decided to begin the outdoor services for the patients by February next year completing the work of first phase, which include multi-storied OPD building and two separate blocks of residential blocks for the employees. Today a coordinating team of state government led by Principal Secretary of Health and Family Welfare Department Anil Verma visited the AIIMS project site in Basantapur village of Kalyani. He, however, expressed his annoyance for the lackadaisical approach of officials of WB State Electricity Distribution Company Limited (WBSEDCL) and Public Health Engineering Department for the inordinate delay in setting up dedicated 14KMV power station and 2 units of 20MTG water supply projects for the proposed OPD and residential building. Verma told the officers to expedite the works of basic infrastructure so that the proposed inauguration of the OPD does not hamper.

In last year a central health team proposed the state government to pave ways so that OPD services could be launched using existing hospitals in the town as its ancillary units. However, it was later decided to launch the service at the Basantapur site itself. The construction of multistoried OPD building and two blocks of residential building started by Andhra Pradesh based KMV Projects Limited. The state government coordinated with the centre’s executing wing Hospital Services Consultancy Corporation Limited to help development of pre-service infrastructure on the 179.82 acres land.

An officer of state health department said: “The progress of work and development of infrastructure has been largely suffered due to delay in setting up of power station absence of water supply, which is very important pre conditions to ensure the launching of the OPD services.”