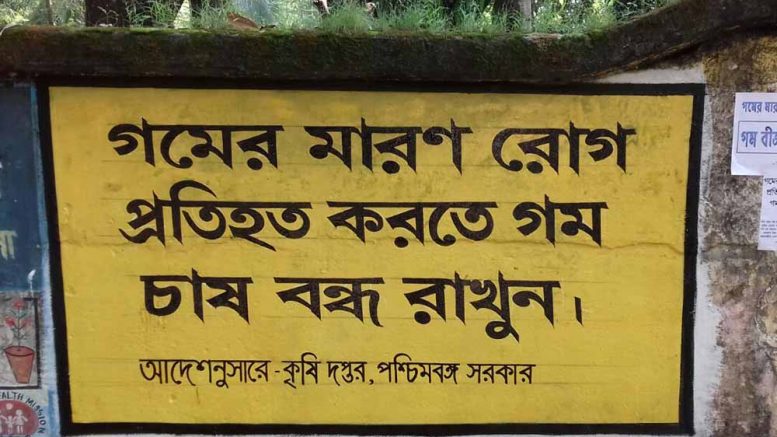 Krishnanagar, Nov. 2: The state government has launched a rigorous awareness campaign among the farmers in Nadia and Murshidabad district so that they do not cultivate wheat in the ensuing wheat farming season beginning from November 15 to avoid spreading of suspected fungus of deadly “wheat blast” disease that damaged crops in around 1000 hector land last year.

The awareness campaign has been prompted ahead of the farming season after Nabanna received reports that a section of farmers have been desperately looking for wheat seeds secretly despite the state government declared ‘wheat holiday’ in these two districts banning its cultivation for two years to avoid spreading of diseased. While the state government has decided to discourage the farmers making them aware about the risks by circulating leaflets and organizing camps, it is at the same time distributing free oilseeds and lentil seeds so that they could undertake alternative farming during ‘wheat holiday’ to sanitize their land.

In August the state government issued the ban prompted by an advice from centre so that the fungus that entered from Bangladeshcould not spread further.

State agriculture minister Ashish Banerjee said: “The awareness campaign has become necessary as a section of the farmers are yet to realize the menace and still looking for wheat seeds. Our initiative is to discourage them through awareness for larger interest”.

Deputy Director of Agriculture, Nadia Ranjan Roy Choudhury said: “As the season is set to begin, we trying to ensure that wheatseeds are not available to farmers from any source. The job is very difficult still we are trying our best”.

“We have also requested the BSF authorities to be vigilant so that no wheat seed could enter India and asked panchayat to keep watching at local levels”, he added.

“The awareness campaign has become necessary as a section of the farmers are yet to realize the menace and still looking for wheat seeds. Our initiative is to discourage them through awareness for larger interest” –  Ashish Banerjee, Agriculture minister.

In 2016 wheat in around 1000 hector land in Nadia and Murshidabad were affected due to the disease. The crops had to be burnt to control the spread of the disease as per the joint decision by state government and union agriculture ministry. To protect the farmers, the state government paid compensation of about Rs.4.10 crore. Later the sate government declared ‘wheat holiday’ for two years.

“This is the only way left to us at present. Our objective is to make the land unfavorable in these two years by alternative farming. Fungus would be weaker by this time”, said Deputy Director of Agriculture (Nadia) Ranjan Roy Choudhury.

Sahjahan Sheikh, a farmer in Chapra said: “This is a good initiative which also provided me a new experience to cultivate lentil”.