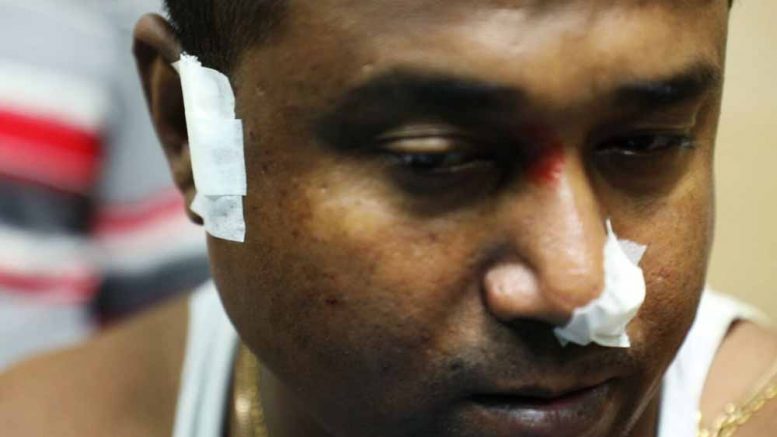 Chakdaha, Nov. 3: Three policemen were injured while trying to quell a clash between two opposing factions of Trinamul Congress in Nadia’s Chakdaha late on Thursday night. Angry police personnel later lathi-charged to disperse an armed group of Trinamul activists and some miscreants who allegedly gathered at the house of Chakrabortry, brother- in-law of Chakdaha Municipality chairman Dipak Chakraborty.

9 Trinamul Congress activists were arrested by police, who also recovered a firearm allegedly used by Biswajit to open fire at Soutra Bhattacharjee. The arrested Trinamul workers were produced before the additional chief judicial magistrate’s court in Kalyani which ordered police custody for 1 and jail custody for 8 others for five days.

Three police personnel including two sub inspectors Sumit De and Debananda Biswas were admitted to Chakdaha hospital with multiple bruise and cuts, but one of them was released later. Both Sumit and Debananda earned injuries on head, face, chest.

The Trinamul leadership of either faction, however, refuted the internal feud and termed the incident as clash between two groups of miscreants. But, Party insiders, however, categorically said that shifting of loyalty by a large section of party workers in Chakdaha since Sankar Singh has joined Trinamul developed contention.

The feud between civic body chief Dipak Chakrraborty and newly inducted leader Sankar Singh took such a passe’ that barely a week ago party’s district in charge Partha Chatterjee had to intervene to sort out the differences. The two rival groups were also warned to settle the differences amicably and to work as united force. But, the differences have been taking gradually ugly turn with reports reached in ‘Kalighat’ making the top leadership unhappy over the ongoing tussles.

Trouble broke out on Thursday night at about 9.30pm when youth Trinamul activist Soumitra Bhattacharjee was attacked by rival group’s Suman Roy (alias Hampi) and Biwajit De, both close to Dipak and Goutam Chakraborty.

Local people nabbed Biswajit and handed him over to police. This angered the party’s rival gang close Chakdaha town committee secretary by Goutam Chakraborty, which attacked at least five Trinamul leaders’ house close to Sankar Singh in nearby areas. These include the house of Chakdaha Trinamul youth wing president Sadhan Biswas.

Biswas said: “At about 11pm a group of about 20 armed miscreants who are close some of our party leaders attacked my house. They ransacked it, hurled bombs and beaten up me and attacked party workers Malay Saha, Shyamal Saha and ransacked Palash Saha’s house”. A police team travelling in a Tata Sumo was attacked near Goutam Chakraborty’s house when it was rushing to Sadhan Biswas’s house. Armed Trinamul activists damaged the police vehicles and attacked the cops with iron rod, bricks and fired at least two rounds injuring SI Sumit De, Debananda Biswas and Sukanta Sarkar. Another police team rescued them and took to Chakdaha hospital. Police sources said that the a section of the miscreants and party activists loyal to Chakraborty attacked the cops being instigated by lady councilor of the party, who also allegedly threatened Chakdaha police in charge Pintu Saha of dire consequences.

A reinforced police team soon landed at the spot near Chakarboary’s house and started lathi charge dispersing the Trinamul activists. 9 Trinamul workers were arrested from the spot.

“I have no idea why police entered my house, ransacked it and beaten up my son and other family members” – Goutam Chakraborty, Trinamul leader.

Party’s Nadia district executive president Sankar Singh, a resident of Chakdaha, however, refused to speak on the issue.