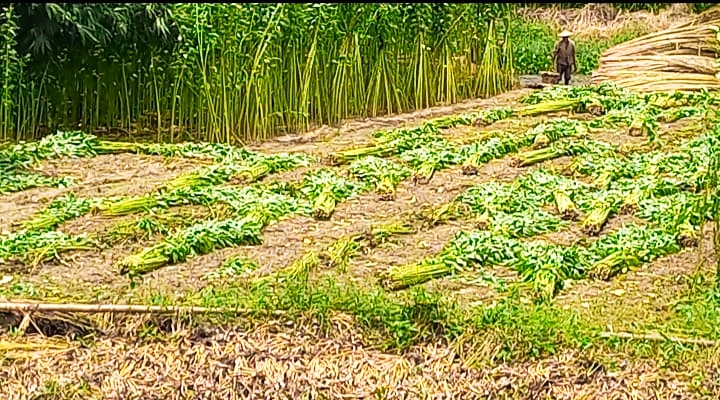 Bundles of jute plants left abandoned on the filed in Nadia

Krishnanagar, July 16: In the wake of the scarcity of water needed for retting jute due to poor rainfall this season, the state government has issued an advisory for the farmers to dig up small ponds on their own land immediately and arrange water to fill them for the job. The state agricultural department has directed the district units to convey the advisories so that the farmers don’t waste time expecting rain since the supply of jute fibre to the mills is seriously suffering due to the absence of rainfall.

Sources in the state agricultural department said that despite a bumper production of the jute this year, the retting process of the plants being held back largely due to the lack of rainfall that usually fills up the ponds, canals, and water bodies where the plants decomposed for extraction of the golden fibre.

But as per an approximate estimate only around 5% of the jute produced has been put for retting so far as farmers have yet to withdraw the plants from fields due to lack of rainwater for retting. This has created a shortfall in supply leading to a hike in the price of raw jute by around Rupees 300 ending up the price at Rupees 6500 per quintal, a jute mill owner in Naihati said. “The poor rainfall only to be blamed for it….” he said.

As per the report of the weather department, high jute-producing districts like Murshidabad recorded 67% rainfall during the period from July 1 to 10, followed by Nadia at 61%, North 24 Parganas at 52%, and Hooghly at 32%.

As a result in many areas of these districts, farmers either have yet to withdraw mature plants from fields or left the withdrawn plants abandoned being failed to conduct the retting for lack of water.

As an immediate alternative jute producing districts mostly located in south Bengal pursuing the state government directives, have prescribed digging small pond-type ditches of at least 40 ft x 30 ft size with 4 ft depth and to lay a  tarpaulin sheet before filling it with water (irrigation source) so that the retting of jute plants produced on 1 bigha land could be done there

To complete the retting fast the state government has advised using “Crijaf Sona’,  a bacteria that would reduce fermentation time. The bacteria will be supplied free of cost, an official said.

A senior official of the state agriculture department in Calcutta said, “Our aim is to minimize the delay in supply and to ensure that the farmers suffer no financial loss. If the alternative retting is properly managed as prescribed we are hopeful Jute would begin to reach mills by the end of July” The retting of jute is a type of fermentation process in which the fibre from the bark of the plants is separated. The cortical and phloem tissues of the bark of plants that contains the free strands are decomposed in the process so that they can be loosened or separated from the non-fibrous woody stem. The farmers in rural Bengal after harvesting and defoliation weighed down the bundles of jute for retting in water bodies, ponds, and canals for about two weeks to complete the process.

But owing to a drought-like condition caused for lack of rainfall most of such ponds, canals, and water bodies have dried up putting the farmers in an unusual crisis and leading to a huge financial loss.

Maharaj Bairagi, a jute farmer in Nadia said, “It becomes an unusual situation this year. Jute has matured, but I could not remove them having found no means for retting. I have left it on the field expecting rainfall. But if this drought-like situation continues the entire production would be damaged yielding a huge financial loss”.

Deputy Director of Agriculture (Admin), Nadia Dipankar Saha told The NfN, “It is really quite an unusual situation. So to overcome the problem, we have told the farmers to dig up the pond…The block agricultural development officers have been directed to help them at the grass root level. We are hopeful that if the ponds are dug up and Jutes are weighed down there for retting the situation would improve”.