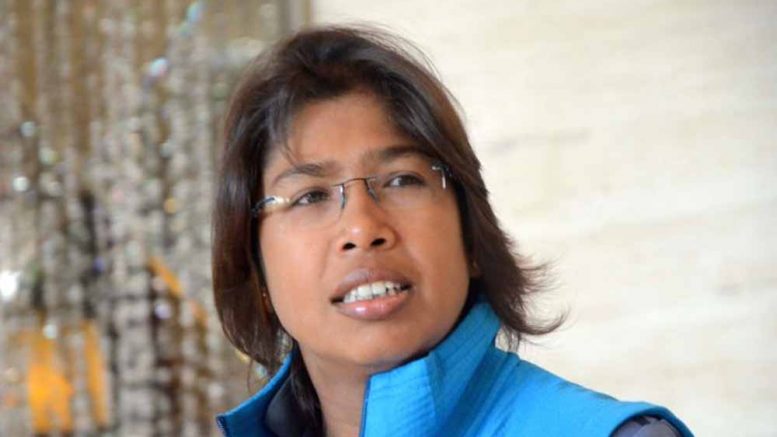 Kolkata, Sept. 20: Former Indian women’s cricket team captain Jhulan Goswami is the latest sports personality to be added to the list of Hindi biopic set to be made in Bollywood very soon. The story of Jhulan to be portrayed in a Hindi movie to be directed by Bengali film and television serial director Sushanto Das. The shooting of the film would begin in April next year.

Das has announced that the shooting for the biopic on Jhulan, likely to be named as ‘Chakdaha Express’, would begin next year in Chakdaha. If everything goes as per plan, the film would hit the theatres by the end of 2018. Jhulan Goswami is at present the highest wicket taker in one day international matches. She has so far taken 195 wickets from 164 ODI matches. Jhulan has also 40 test match wickets in her kitty which she got from 10 matches. Jhulan, who made her debut in world cricket in 2002, took 15 years to reach the milestone. She was chosen as the skipper of Indian team in 2008 replacing Mithali Raj and led the country in 25 one day international matches. Earlier in 2007, she was adjudged by the International Cricket Council as the cricketer of the year. In 2010 Jhulan was conferred with ARjuna award and two years later with Padmashree award

“It will be a film on Jhulan Goswami’s journey to success to the top of the world cricket. I will try best to cover her life extensively from small town Chakdaha to Lords in England where she played the world cup final recently”, film director Sushanto Das said.

Das has so far made only one big screen movie “Asche Bochor Abar Hobe” (2015). He, however, known for his penchant in making Bengali soap on sports like ‘Dweep Jwele Jai’, a story on a badminton player. His new project, “Joyee”, story of girl who loves to play football set to be telecasted soon on Zee Bangal channel soon. His other works include Bengali serials ‘Saat Pakey Bandha”, “Pratidan” and “Radha”.

About the Biopic on Jhulan, Das said: “This is going to be my dream project. I will try to focus on her journey, her endeavor being a small town girl and the odds she faced on her way to success. I will try to shoot extensively from Chakdaha to Lords and other ground where she played covering all the major episodes of her life including some untold ones. I am hopeful that many young persons, particularly the girls across the country will be able to relate them with the movie who will also be inspired watching it”.

“At present research works are on. I have had several sessions with Jhulan to get the best details. We are also preparing the script as well”, Das added. He, however, refused to divulge the star cast of the movie.

“We are at present in touch with some leading actors in Bollywood. The talks are on with them. But, nothing has been finalized yet. I can only say that you would find renowned actors from Bollywood in the lead roles, particularly in Jhulan’s role”, Das said.

While Jhulan is the new one to be added to the list as her life is set to be chronicled, works are already in progress on similar biopic on the life of ace badminton star Saina Nehwal with Shraddha Kapoor in the lead and another biopic on legendary hockey player Dhayan Chand”