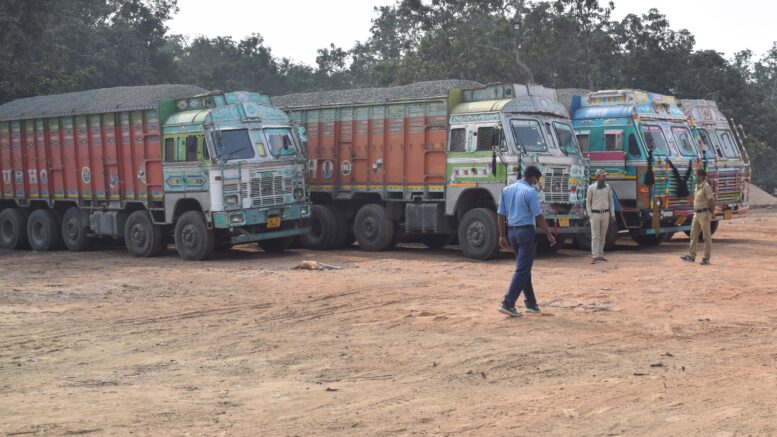 Santipur, Dec, 17: In what could be termed as a sheer embarrassment, police on Thursday apparently compelled to seize over a dozen trucks overloaded with stone chips while plying over the NH12 due only after BJP MP Jagannath Sarkar intercepted some of them. The MP alleged that the police and truckers developed a nexus to damage the roads putting the lives of motorists in danger.

While on the way to a party programme Sarkar trapped in traffic congestion apparently due to slow plying over overloaded trucks on the road. He intercepted a few of such vehicles and called police who later intercepted more such trucks and seized them charging for overloading.

The trucks were coming from Pakur and heading towards Calcutta.

“Police was not performing its duty, so I had to act in the public interest. Making a journey through NH12, particularly between Santipur to Jagulia has become a horrible affair due to the callous approach of police which a section of truckers exploiting plying with overloaded vehicles. They have been damaging roads and put the lives of people at risk making a nexus with police”, said Jagannath Sarkar.

The police apparently under pressure seized 12 trucks all laden with stone chips and charged them under section 113 of the Motor Vehicle Act, 1988.

There are restrictions laid by centre on the height and weight of trucks. The maximum permissible height of vehicles carrying construction equipment, motor vehicles, livestock, and white goods has been set at 4.75 meters. On the other hand, different trucks have different limits of a load.  “At present, 2 axel trucks enjoy a legal road limit 16.2 ton, whereas 4 axel trucks like semi-trailers can carry 35.2 ton”, an official of Nadia road transport authority said.

Earlier on Wednesday night Sarkar trapped in jam on Santipur bypass of NH12 while returning home due to the breakdown of an overloaded vehicle. He got off his car and tried hard to create a passage stopping errant car driver with the help of his security personnel. Sarkar alleged that there was no police.

On Thursday morning on his way to Gangnapur, he again trapped in traffic congestion, on the Santipur bypass apparently owing to the slow movement of vehicles due to a good number of overloaded trucks. Sarkar disembarked from his car and started intercepting the overloaded trucks. Watching him in action, a number of local BJP supporters joined him being over-enthusiastic.

Sources said after intercepting five trucks, the MP called the police. A team of Santipur police rushed in, who then compelled to act apparently under the direction of the MP.

12 trucks were seized which were sidelined at a Dhaba and slapped with cases.

“I was shocked to see a long chain of overloaded trucks crawling on the NH12 bypass. The trucks were moving in a dangerous state damaging road. Police were not doing their duty. The NH constructed by centre being damaged regularly due to plying over overloaded trucks while police watching it mutely. The trend of overloading increasing every day as police earn from it”, alleged Sarkar.

An engineer with PWD said, “The stress on the road increases substantially and make it fatigued if overloaded trucks ply”.

Meanwhile, senior police officials of Ranaghat police district preferred to remain tight-lipped about the MP’s allegations and intervention. However, a police officer claimed that traffic congestion on NH12 is largely due to poor road condition. “We on regular basis slap case for overloading. But even eligible trucks ply slowly due to craters as the drivers are afraid that their vehicle could overturn”.