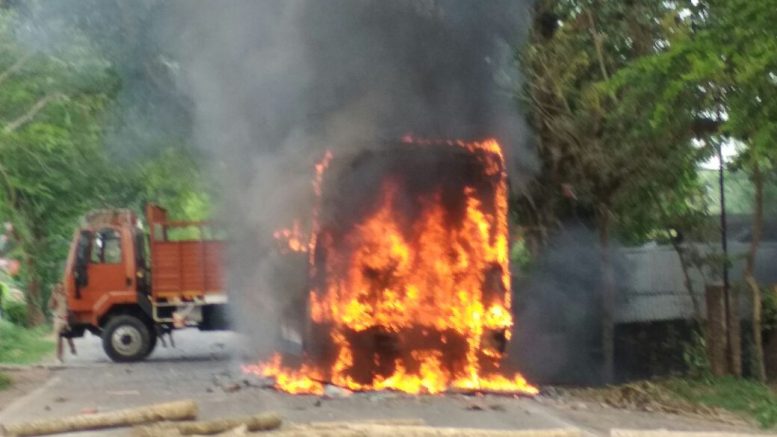 A state transport bus set on fire by mob in Mahisbathan

Karimpur, May 17: A violent mob backed by BJP set a police vehicle on fire along with a state transport bus and two motor cycles during a clash with police when they blocked Krishnanagar-Karimpur road protesting forced eviction of leading BJP candidates and their counting agents by armed Trinamul Congress activists from a counting centre at Karimpur-II block on Thursday afternoon.

Trouble began when the Trinamul activists stormed inside the counting station in Mahishbathan during counting of votes for Nandanpur gram panchayha. They forced the electoral officials to issue winning certificates in favour of the defeated Trinamul candidates. They also opened fire injuring BJP activist Pabitra Roy which prompted the mob to turn violent attacking police which was trying to remove a road blockade put by them protesting the Trinamul attack.

A police constable, identified as Tapas Sarkar was injured in the mob attack and admitted to Karimpur state general hospital.

Sources said Trinamul activists stormed into the counting station when the BJP activists started celebration as they were leading in most of the seats at Nandanpur panchayat. A BJP candidate said, “We were near to winning 15 seats of the panchayat out of 24 during second round of counting when the Trinamul backed miscreants entered inside. They beaten up us and forced us to leave the counting centre at gun point. They tore winning certificate of one of our candidates who won by 400 votes defeating Trinamul candidate. We sought help from administration and the police personnel present there, but none came to help us. The police officials rather forced us to leave the centre”.

The incident led BJP activists to put a road blockade which eventually turned violent prompting police to lathicharge to disperse the mob and to clear the road.