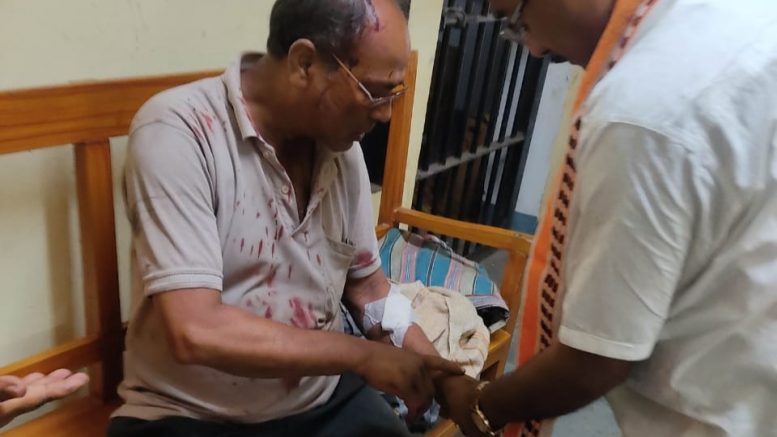 Ranaghat, Aug. 11: At least 10 persons were injured when a group of BJP and Trinamul activists clashed in front of a central government team at the Ranaghat-I BDO office premise in Nadia’s Habibpur on Thursday when it went there to examine the implementation of the centrally funded projects.

BJP leadership alleged that their supporters and some beneficiaries of the central housing scheme who were denied houses were thrashed by the Trinamul activists as they lodged complaints against the Trinamul-ruled Barasat gram panchayat authorities about irregularities done by it under the scheme.

The Trinamul leadership in turn rubbished the allegation and alleged that armed BJP supporters attacked their men when the party was celebrating the Raksha Bandhan festival in the area.

Local sources said that in the last financial year 56 families in the Barasat area under the Ranaghat-I block were allotted houses under the Pradhan Mantri Awas Yojana (PMAY). Funds for the construction of houses under the scheme were also allotted to them. However, no money was eventually credited to their bank account, a beneficiary alleged.

Ranaghat North West BJP MLA Parthasarathi Chatterjee said, “The local gram panchayat authorities being politically prejudiced denied the beneficiaries of their legitimate benefits even after they were allotted funds. The houses were eventually given to other persons. We brought this matter to the notice of the nodal officer of the scheme. We also planned to inform the central team about the issue.” “But since Wednesday afternoon suddenly the gram panchayat authorities became active apparently to avoid embarrassment before the central team and asked the 56 beneficiaries to visit the panchayat office for the fund allotment…But when some of them refuted the invitation and said that they would be told the issue to the central team, the panchayat pradhan and local Trinamul leaders began threatening them. Today when they were going to meet the team at the BDO office, the Trinamul miscreants thrashed them brutally”. Chatterjee added further. Party sources said that six persons were injured in the attack.

Local Trinamul leader and head of Ranaghat-I block Panchayat Samiti Tapash Ghosh, however, rubbished the allegation. “It was a planned attack on our party supporters. We were surprised to see that BJP supporters armed with blades raising slogans in abusive language accompanying the central team and attacking our party supporters ”.

“The allegation of denial of houses to the needy beneficiaries is absolutely baseless and only aimed to influence the visiting central team members”, Ghosh alleged further.

Ranaghat-I BDO Sanjib Sarkar too refuted the allegations made by the BJP leadership. “As far as I know that during the 2016-17 financial year funds meant for housing scheme beneficiaries were erroneously credited to other accounts. But during my tenure, no such financial irregularity has occurred at all”.

Injured party supporters of both Trinamul and BJP were taken to Ranaghat subdivisional hospital. They were released after primary treatment. Both the party leadership lodged separate complaints against the other at the Ranaghat police station later in the afternoon. However, no arrest was made till the evening, the police source said.