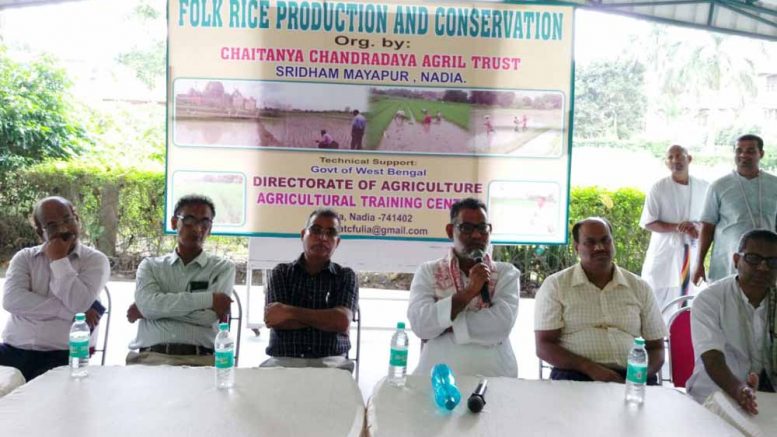 Agricultural minister Purnendu Bose during a workshop in Mayapur on Friday.

Mayapur, Aug. 18: State agricultural minister Purnendu Bose today appealed the farmers to come up to cultivate the dying species of aromatic rice those were once symbolic to the rich tradition of Bengal. The minister also urged the farmers to adopt the organic method of farming so that the aroma and taste of those rice varieties remain natural.

The minister was speaking at a workshop on production and conservation of dying species of rice varieties, known as ‘folk rice’, which was organized by the Chaitanya Chandradaya Agricultural Trust (CCTA) with the technical support of state government’s agricultural department.

Inaugurating the workshop, Bose assured the farmers that he would take personal initiative so that any endeavor taken to cultivate the extinct varieties of rice becomes successful. “If you have any queries and interest in this regard, please feel free to contact the agriculture department. It will provide you all necessary supports to make your initiative successful”, the minister said.

Praising the efforts of CCAT Bose said: “The initiative of the organisation will set an example before the people”

Speaking on the occasion Deputy Director of Agricultural Training Centre Anupam Paul, who will train the farmers, said: :”The initiative has been launched with the objective to bring back traditional aromatic varieties of rice into mainstream by using natural methods of farming. In this method no chemicals fertilizers and pesticides are used”. He urged the farmers to refrain from using chemical fertilizers which enhances productivity. “In the long run such fertilizers cause harm to the soil and its natural minerals and components as well as to its moisture level”, Paul said.

For the last couple of months, the CCAT   has been actively working to  revive extinct varieties of aromatic rice – RadhaTilak , Kala Bhat, Dudheshwar , Hamai, Jhumpuri, Khara, Balam and many other varieties.

“The cultivation is being done without using any artificial chemicals so that the genuine aroma , physical benefits of each  variety of rice remain intact and causes no health hazards”, said informed Jetha Hansda, Chairman of the CCAT.