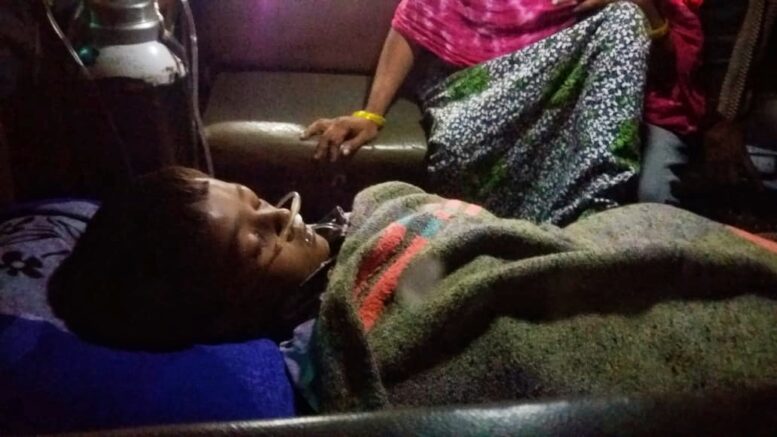 Krishnagar, Nov. 10: 5 Jagaddhatri puja organisers were arrested by Krishnagar police during the early hours of Wednesday morning following a seven year’s boy from Malda died inside an ambulance on way to SSKM hospital during a night long blockade on NH12 put by them at the outskirt of the town demanding permission for traditional immersion procession.

Police has banned this year’s traditional immersion procession called ‘sang’ following an order issued by Calcutta High court as a Covid19 restriction measure, which angered a section of the Jagaddhatri puja organisers.

Sazlum and his nephew Amirul even failed to draw attention of the on-duty police officers until 3 am – after about 2 hours since they stuck to the blockade, when the boy stopped breathing.

The police in a last minute initiative removed the blockade to pave way for the ambulance and took it to Nadia district hospital in Krishnagar town, where the attending doctors declared the boy dead.

The poor father, a daily labour by profession, returned home in Mothabari-Ghuskitala village later in the morning and buried his son.

“The demonstrators were burning tyres on the road so that no driver dares to make access. I fell on their feet and appealed with folded hands to allow the ambulance. But they refused. I tried to draw the attention of the police officers but they also did not bother to respond…” Sazlum Seikh, said.

“We waited for about 2 hours…but at about 3 pm my son stopped breathing. I rushed to the police who then became active and took us to a local hospital, but my son had died by the time”, he further said. The boy on Tuesday afternoon fell on ground while playing on an open terrace and suffered head injuries. He was first taken to Malda Medical College hospital, which referred him to SSKM Hospital. Sazlum started journey for Calcutta from Malda at about 8.30 PM and was trapped in a blockade at 1 am in Krishnagar due to the blockade at PWD More.

The incident sparked anger in the area as a huge crowd which gathered during the cremation demanded strong punishment of the demonstrators that prompted the Nabanna to seek a report from the Nadia administration.

Superintendent of Krishnagar police district Ishani Paul said that the offenders will be punished definitely, but claimed that police had no knowledge of the trapped ambulance.

“We neither had any knowledge about the ambulance nor anybody approached us for heop. The ambulance was probably far behind in the long line of trapped vehicles. Had it come to our notice, we would definitely clear the way for the ambulance”, the SP told The NfN.

“It was a very unfortunate incident. We have started a suo moto case and so far arrested five persons and are trying to identify more by scanning the video footage”, she added.

Earlier a large section of Jagaddhatri puja organisers notifying people gathered near the bus stand at about 9 pm and began a demonstration demanding permission for an immersion procession. They later gheraoed the town police station but eventually shifted the demonstration to PWD more where they also put blockade on NH12 that continued till 3 am.

SP Ishani Pal said, “The ban on immersion is not our wilful decision. We are just following the Calcutta High Court order and subsequent government guidelines. We had categorically told the organisers about it. Nevertheless, a section becomes aggressive”.

Trinamul leader Debasish Roy, a puja organiser and member of coordination committee said, “We also want traditional immersion procession, but did not support the way some organisers have opted”.

Local Trinamul MLA from North Bengal Development minister Sabina Yasmin visited the boy’s parents and expressed condolences. “I will take up the matter with the highest authorities so that the offenders are punished”, she said.