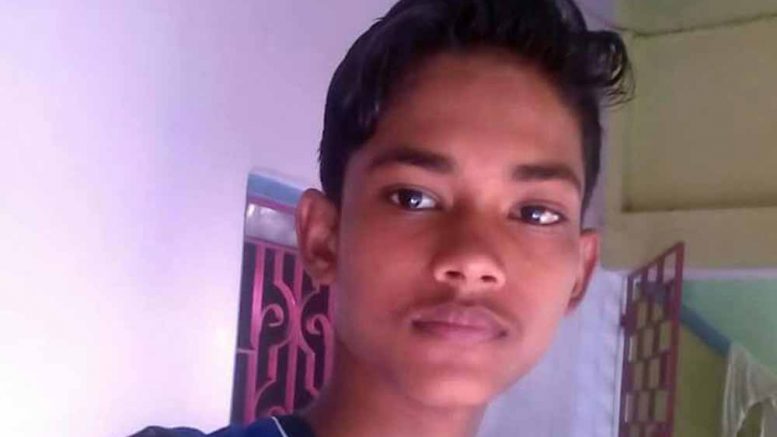 Ranaghat, Oct. 7: Unable to bear the shock of his mother’s death, a 14 year’s boy today ended his life by jumping in front of a running train near Ranaghat railway station in Nadia. Deceased boy, identified as Soumen Biswas (alias Riku), a student of class eight Hijuli Sikshaniketan School, was rushed to Jawaharlal Nehru Memorial hospital in Kalyani, where he was announced brought dead. Soumen with his mother Tusi Biswas

Soumen’s mother Tusi Biswas (37), a home maker from Hijuli-Chowrasta, who was suffering from diarrhea died in the same hospital early in the morning.

Boy’s father Nandadulal Biswas said: “My son was very much attached to his mother. It appears that he could not bear the pain of her death”.

On the same day she was transferred to JNM Hospital in Kalyani. But, since then her condition started deteriorating. Soumen spent sleepless nights at the hospital till Friday along with his father. The woman died today morning when the boy was at home. Hearing the news of demise of mother, Soumen became upset and left home.

Government Railway Police sources in Ranaghat said the boy jumped on the railway tracks before a running Sealdah bound train at about 10.30am near Mill Para area in Ranaghat, around 1km away from his residence.

However, before the police could send the boy to hospital, the family members picked up the boy and took him to Ranaghat sub divisional hospital. But, he was immediately transferred to JNMHospital in Kalyani, where he was declared brought dead.

A doctor who attended Soumen at JNM hospital said: “The boy had fatal hemorrhage on spine, vertebrae and head that apparently caused the death”.

Boy’s father Nandadula said: “My son was very closely attached to his mother. During her illness for over last one month, he would always fed her and never taken food before her. But, I never though that he could end his life this way”.