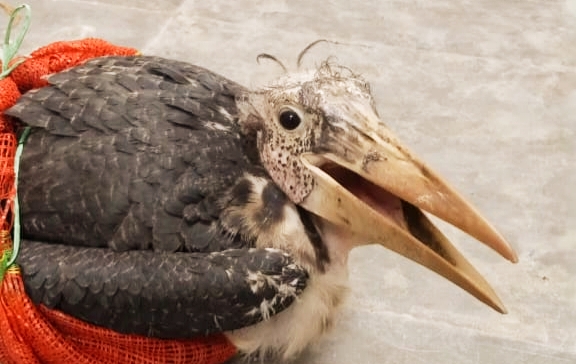 Krishnanagar, Oct. 11: A patrolling team of Border Security Force (BSF) attached to the 82-Battalion rescued nine exotic birds while being smuggled to India from Bangladesh through a porous point of the Indo-Bangladesh border in Nadia’s Hridaypur on Monday night.

The rescued birds include 4 Toucans, 4 Black Cactus wrens, and 1 Marabou stork, which the smugglers were trying to smuggle to India putting them inside wooden cages.

Marabou stork is an arge-wading bird in the stork family known as Ciconidae and is generally found in Africa. The bird that has a massive dagger-like bill and a naked pink head and neck have a big demand for the smuggling racket. Cactus wren,  a coveted species in the smuggling market, belong to wren endemic, mostly available in the deserts of the southwestern United States and northern and central Mexico.

On the other hand, Toucans are also in high demand the smugglers. The bird, which is a member of the Neotropical near passerine bird family Ramphastidae, has a price of about Rs.30000 per piece, sources said.

BSF sources claimed all these birds have a big demand for private zoos and as pets, are usually sold between Rs. 30000 to Rs.50000 by the smugglers.

BSF officials could not ascertain how the smugglers got to the birds since they managed to flee amid the darkness of the night.

The exotic birds were later handed over to the Beat Officer of Forest department officials in Krishnagar who examined the birds and kept them under observation.

The birds have been given an oral rehydration solution and are currently under observation”, a forest official said. A BSF spokesperson of South Bengal Frontier said a patrolling team spotted some mysterious movement of some person close to the border on Monday night. The jawans challenged them, but they fled through the bushy plants leaving some wooden cages from which the bird was recovered.

“We are trying our best to prevent smuggling of rare birds taking strong steps, but it appears to be unending”, a BSF spokesperson of South Bengal Frontier said.