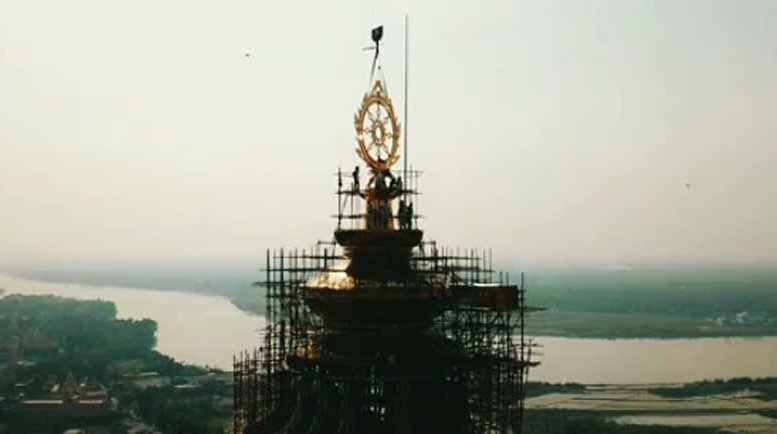 The biggest Chakra being installed over the top of the biggest dome of Vedic Planetarium. NfN Picture

Mayapur, Feb. 7: The ISKCON authorities in Nadia’s Mayapur on Wednesday installed two giant Chakras (wheels) on to the two domes of the “Temple of Vedic Planetarium” (TOVP). A crane pulled the two chakras above and put them on the top of the two domes, one big and the other is small one. The big chakra made the height of this religious monument 113 meter (370ft) from the ground level. Once completed the TOVP will be the second highest religious monument in the world after the St. Peter Basilica in Vatican.

It took about four hours to install the chakras over the domes through a motor operated giant lever. The Planetarium, however, is still under construction over a plot spanned over 4-lakh Sq.Ft. is expected to be opened for puja and public visit during March 2022. The construction work had begun during 2009.

On the occasion of the grand installation of these stainless steel made gold plated two ckakras chakras, holy yajna and pujas were offered by the devotees that held inside the Iskcon premise in Mayapur.

Chairman of the Planetarium’s construction team Ambarish Das (better known as Alfred Ford, grandson of Henry Ford) said: “The installation of the Chakras is very significant as it represents Krishna’s weapons which will protect the temple and the devotees as well”.

The big chakra, weighs about 1.5tonne was installed over the biggest of the three domes, titled as Sri Radha Madhab dome. The smaller chakra was installed over the smaller dome, named after Sri Narsimha Dev. The Chakras were made by the Russian artisans incurring a cost approximate near Rupees 15-crores.

Around 25000 devotees across the globe witnessed the grand installation today. “It is a landmark day in the history of Iskcon. But, still we have to go a long way to complete the project and to open it for devotees and visitors before March 2022′, Ambarish Das, who initially funded the construction said. Ford today joined the puja and offered Aarti along with her Bengali wife Sharmila.

In a statement the Iskcon authority said: “This event heralds one of the most important in Iskcon’s 51-year history and fulfills the vision of Srila AC Bhaktivedanta Swami Prabhupada to bring the Vedic culture and wisdom to the attention of world through a scientific and authoritative presentation based on Vedic knowledge”.