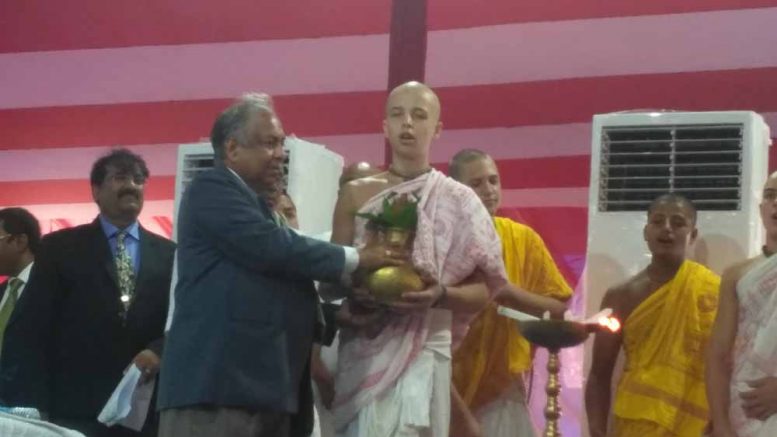 Tehatta, Sept. 1: Chief justice of Calcutta High Court Jyotirmay Bhattacharya on Saturday appealed the lawyers in the state to ‘cooperate’ with the judges at different courts and not to be ‘hot tempered’ considering that the judges are overburdened.

Inaugurating the new building of the Tehatta sub divisional court in Nadia the chief justice, who is scheduled to retire this month, expressed his serious concern over the increasing responsibilities of the Judges due to huge number of pending cases across the state. “At present each Judge working for at least three courts. They are taking tremendous workload.  Please create an atmosphere in court conducive for work so that cases are settled without hassle”, chief justice appealed the lawyers.

The chief justice attributed the ‘workload’ due to huge number of pending cases across the state.

He said, “There are at least 22lakhs cases are pending in different courts all over the state. We have at present 1033 courts in the state. But, to settle all the pending cases we need an additional 1773 new courts across the state and to ensure smooth functioning of the judiciary.

In an unusual approach, he also requested the lawyers not to lose temper while arguing cases. “As the Judges are over burdened, I would request you not to be hot tempered (Matha Garam Korben Na). Please cooperate with the Judges for smooth functioning of the court”, Bhattacharya said in his inaugural address at the new court building.

“To settle all the pending cases we need an additional 1773 new courts across the state and to ensure smooth functioning of the judiciary” – Jyotirmay Bhattacharya, Chief Justice, Calcutta High Court

The chief Justice at the same time has also requested the Judges to give ‘appropriate’ respect to the Lawyers. “I would request you to give the lawyers their due respect in appropriate manner”, he told the Judges.

Earlier he inaugurated the new court building adjacent to the Tehatta sub divisional administrative building. The four storied fully air conditioned building has been constructed incurring Rupees 14-crore. The Tehatta court so far housed at a private rented building since it was established in 2004.

State law minister Malay Ghatak said, “The new building would accommodate seven courts including that of a court of additional district judge, apart from additional chief judicial magistrate and courts of other level”.

Both chief justice Bhattacharya and the law minister praised the initiative taken by zonal judge Samapti Chatterjee to complete the construction work of the new court building. She was also present at the inaugural programme.

“The court will have six police stations at its jurisdiction”, the minister added. The new building will be fully operational by end of this year.