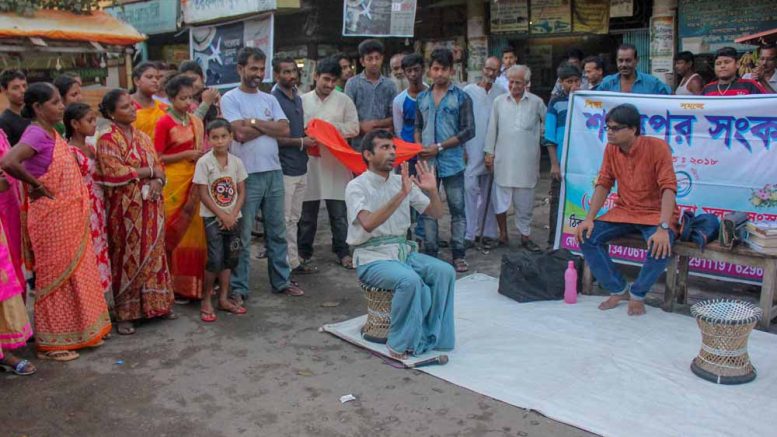 Santipur, Sept. 1:  Members of a threatre group from Nadia’s Ranaghat have started performing street play with the support of some students in Santipur to raise money for an elderly threatre worker who has been suffering from cancer and lost one of his legs around ten days ago due to malignancy.

The members of the Srijak, threatre group who have teamed up with Santipur based students led social organizations ‘Alo’ and ‘Sankalpa’, have come up to help threatre worker Prabhash Ganguly so that he could meet his medical expenses and meet his daily needs later as well.

Prabhash Ganguly, who is known as an ace stage light designer to the theatre lovers in Ranaghat was diagnosed malignancy in a tumor on his right leg. Family sources said, the tumor was removed early in August. But, a biopsy changed Ganguly’s life as it detected the fatal malignancy. To save his life doctors amputated his right leg from his thigh on August 20 at Saroj Gupta Cancer Centre and Research Institute in Calcutta’s Thakurpukur”, said a family member.

Ganguly is now under post operative care being admitted to the hospital in Thakurpukur. Nirupam Bhattacharjee, Director of ‘Srijak’ said, “Prabhash Da as a dedicated theatre activist, was associated with most of threatre groups in Ranaghat. He with his wife led their life with paltry income, but never sought any financial help. Even he informed none about his malignancy. We all were very shocked when learnt that his leg amputated. So we all teamed up to help him, despite his reservation. His wife even forbidden us using his photographs in our endeavor”.

“Initially the nine threatre groups in Ranaghat formed ‘Sangjukta Natya Samsad’ and helped him with Rs.30000. The drive is being continued as he needs money for hospital expenses apart from post operative medical and personal expenses. However, at ‘Srijak’, we decided to raise money through theatre as Prabhashda sacrificed his life for it”, said Nirupam, who runs a business of selling computer printers.

In this endeavor Srijak joined hands with Santipur’s ‘Alo’ and ‘Sankalpa’, Nirupam added.

“Our aim is to rehabilitate Prabhashda to normal life. For this we need to arrange him an artificial leg and money for continued treatment” – Nirupam Bhattacharjee, Director of Srijak Theatre Group

On Friday, members of ‘Alo’ and ‘Sankalpa’ organized shows in Santipur Dakghar More and Kashyap Para more where ‘Srijak’performed to raise money for the elderly artiste.

Sankalpa’s Kushal Pramanik, a class 11 student said, “We do social works and have common love for theatre. So when we heard about Prabhasda, we decided to extend support to the Srijak group. We would organise their shows in Santipur and adjacent areas to raise money so Prabashda could survive”.

‘Alo’s Souradip Chowdhury said, “We will try to organize as much as show possible to raise money so that Prabhashda does not face any financial problem after he returns home”.