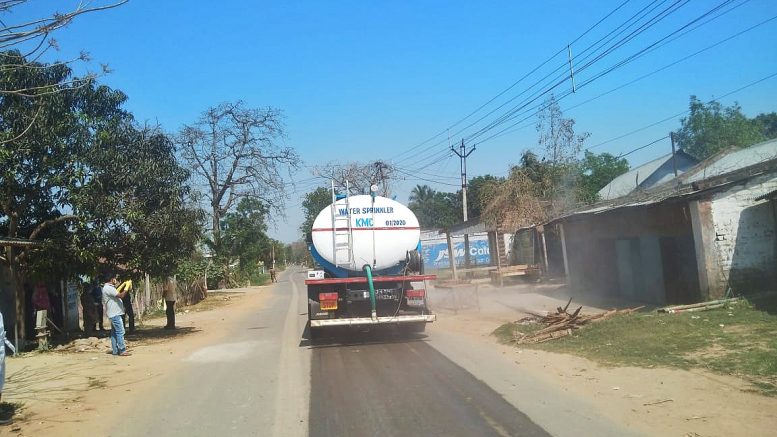 A specially crafted zet spray vehicle of Kolkata Municiapal Corporation in a disinfecting drive in Barnia on Sunday. Picture by Saurav Bhattacharyya

Tehatta, March 29: A 28 year’s lady constable of CISF from Katwa of East Burdwan district has voluntarily made contact with Nadia administration on Sunday morning claiming that she had most probably travelled with the four of the five COVID 19 positive persons from Tehatta in the divyang compartment of Lalgola passenger from Sealdah on March 20.

The young constable, a resident of Char Chakrabirajpur and posted with Delhi Metro rail had visited the local government hospital voluntarily and advised home quarantine since March 21. She was again examined by doctors in Krishnagar on Sunday who put her under quarantine even though no symptom has so far become visible in her.

However, except the lady constable, no one in the vicinity of Barnia village of Tehatta has so far voluntarily come forward acknowledging their contact with any of the five Covid 19 positive persons so that the district administration could bring them under proper medical management. On Saturday the administration had appealed people in the vicinity, who might have had come in contact them, to identify themselves so that the possibility of any community outbreak of coronavirus can be minimized.

However, on the basis of information provided by local people and family members, the administration has prepared a list of 49 persons so far who might have come in contact with them. An officer of the district administration said, “Each person is being interrogated individually about their proximity with the five positive cases”.

At the same time, the authorities had begun scanning the area to find out new suspected carriers of the deadly virus. But till Sunday evening no such new case with suspected symptoms has been reported from Barnia. “We scanned the entire vicinity apprehending an area of their access. The good news is that no fresh case has been reported today. We will continue the scanning “, said Tehatta sub-divisional officer Aneesh Dasgupta.

Earlier the officials of the state health department talked to the CISF constable in a bid to understand the extent of her contact with the affected persons on Lalgola passengers. However, she is not confident enough if the two women and two children were the same who were tested positive.

The lady constable who took the Lalgola passenger on the way home for a vacation from Delhi, said, “I am not sure if those two women with the two children are the same who are affected. All of them had a mask on their face. It was the part of a compartment for the physically challenged person attached to the ladies bogie of the Lalgola passenger which I boarded to return home via Debagram railway station a little after disembarking from Rajdhani Express in Sealdah. My contact with that team of four was limited to a boy (aged 6) who seated with me. I touched him on a number of occasions”.

“The four disembarked at Bethuadahari and me at Debagram, 12 km away. I later crossed the Jalangi river to reach home in Char Chakrabirajpur near Agrwadwip. As a precautionary measure next day I visited the local hospital, where doctors advised me of home quarantine. On Saturday I came to know about their illness and decided to contact Nadia administration”, she said.