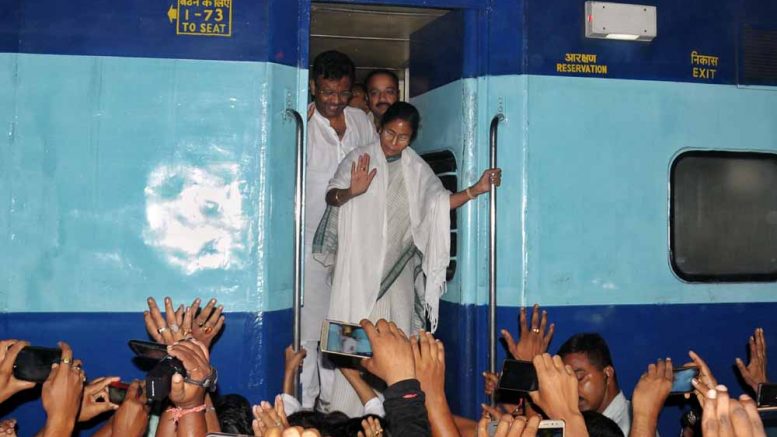 Krishnanagar, Aug. 20: Chief Minister Mamata Banerjee took a break to wave to the passengers at Krishnanagar railway station today evening on her way to Malda via Berhampur.  The chief minister who was travelling in Berhampur bound Dhano Dhanye Express from Kolkata terminus, came out of her coup and wave to the passengers who were waiting for long as news of her journey became viral in the town. Administrative sources said that she would be visiting Malda to take stock of the flood situation tomorrow.

As the train services to North Bengal beyond Malda from Sealdah and Howrah have been kept suspended and the road condition is also not good enough, chief minister decided to go Maldah and parts of North Bengal via Berhampur by train. She would spend the night in Berhampur today and beings her journey to Maldah by road tomorrow morning.

The train service between Howrah-North Bengal and Malda as well as between Sealdah and Malda are remained suspended for 8 consecutive days.

A official said: “Chief minister is very concerned about the condition in Malda and two Dinajpur where the flood victims have started attacking government officials being angry of delay in supply of relief materials. The chief minister personally wants to take stock of the situation there and also wants to boost up the morale of the officials”

Today after the Dhano Dhanye Express arrived at the Krishnanagar station at about 6.45pm, Mamata Banerjee came out of her coup greeted the passengers. She also talked to some of them as well as with some senior party officials. In Plassey too she also talked to party workers and waved to them when the train reached there later.