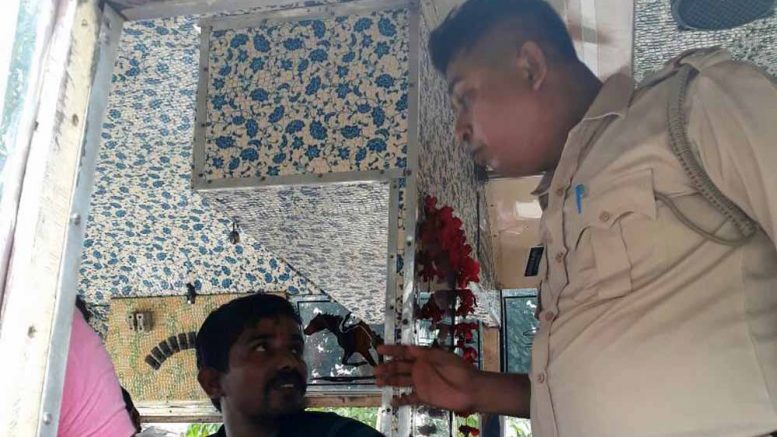 A Police official talking to a passenger in bus of Krishnanagar-Karimpur route. Krishnanagar, Aug. 20: Concerned with reckless driving in 90-km Krishnanagar-Karimpur stretch that claimed over a dozen of lives in recent past, the Nadia police have started taking feed back on the activities of drivers on board to identify the errant drivers.

The initiative came in the wake of August 8 accident in Galakata village in Tehatta, where a bus overturned and rolled into a water filled ditch killing 9 passengers on the spot.

A day after the accident police started interacting with passengers by stopping the bus on road on random basis and asking them 20 different questions to assess the role and responsibility of the driver on board. Similar drive would soon also be taken in the Krishnanagar-Nabadweep stretch, where reckless driving also claimed some lives.

Nadia police superintendent Sheesh Ram Jhajharia said: “The objective of the initiative is to identify the errant drivers so that they can be cautioned well before initiating legal steps on the basis of passengers’ feedback”.

A police officer said: “If the drivers later caught driving recklessly and dangerously, they will be booked under section 184 of the MV Act, 1989”

A senior police officer said: “It is not possible for police to monitor running of every buses on different roads. As an alternative, we have decided to take feedback from the passengers on random basis so that this can be used to scan and identifying the errant drivers”.

“We have set up 20 small questionnaires which the passengers will be asked on rapid fire basis. The answer will be noted down in a feedback sheet and if required this would be used as a complaint against a driver. We will continue the initiative throughout the year”, the officer said.

However, drivers think such initiative is an attempt to hold the drivers solely responsible for the accident without examining the other factors.

Sanjoy Mandal, a driver in Krishnanagar-Karimpur route said: “Accidents do not just occur for the lapse by drivers. There are lots of other factors involved behind it. The police hardly check the tires of buses, most of which are resoled ones which we forced to ply. The police never say anything to passengers who often abuse us and insist to drive on high speed otherwise they would miss train. We often compelled to receive calls of many police and administrative officers who call us to keep seats for them or for their families. Moreover, at present there is no scope to drive in high speed due to speed governor device attached to the engines, which restricts us to drive under 80km/hour. But the road condition and the 52 speed breakers in the 85km stretch hardly allow us to drive beyond 50km per hour”.

Regional transport officer Nadia Soumitra Biswas said: “We have recently identified 25 such vehicles running with resoled tires and other loopholes. Their physical fitness certificates have been cancelled”