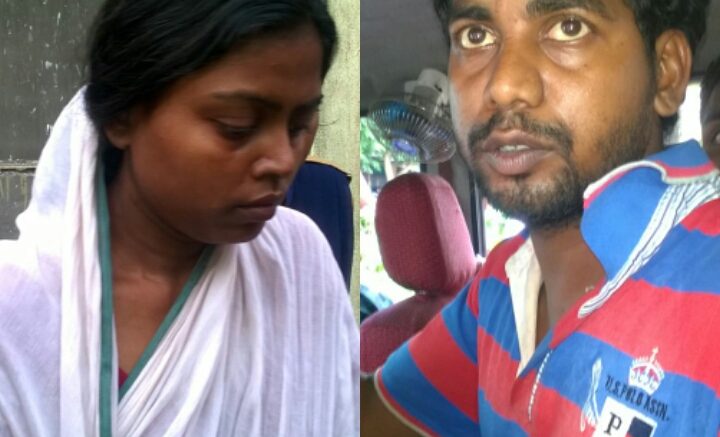 Ranaghat, Aug. 29: Police today arrested the widowed young daughter in law and her fiancé in connection with murder of a 70 year old woman which occurred on August 23 night in College Para area in Bogula.

Ashima Biswas (26), widow of victim Binapani Biswas’s elder son Sameer, was arrested from her residence on Monday night. After interrogating Ashima, police arrested her fiancé Debasish Oraon (32) from Berhampur later in the night.

They were produced before the additional chief judicial magistrate’s court in Ranaghat today, who ordered six day’s police custody for them.

On August 24 morning Binapani Biswas was found dead in a pool of blood in her bed room. The house was ransacked as it appeared a case of burglary. Cash and jewelries made of gold grossly worth over Rupees 2-lakhs were missing from room. A team of forensic experts and sniffer dogs were engaged into investigation.

The breakthrough came on Monday when police detained Ashima after examining the call records of her mobile phone.

Police said Ashima’s husband Sameer who worked in Oman died in February this year. A few months later Ashima met Debasish a developed an affair with him.

An investigating official said: “We noticed a specific number in the call records from which Ashima received several calls and also called that number on several times . We identified the owner of the number as Debasish Oraon and tried to find out his relationship with Ashima. Gradually it appeared that she is in an affair with Debasish. Local sources also confirmed that she recently developed an affair with him for which the victimized mother in law Binapani was not happy. We then detained Ashima and during the interrogation she confessed that she and Debasish conspired to kill her mother in law to pave way for a smooth affair”.

“The duo made a convincing situation of a murder while thwarting a burglary bid. The locals were also angry on police for law and order deterioration. But it was actually Debasish who entered the house with help of Ashima, killed Binapani, ransacked the house and escaped with jewelries and cash”– A Police Officer

But, certain inconsistencies in the statement of Ashima initially made the police suspicious.

An officer of Hanshkhali police station said, “Ashima and Debasish planned to kill Binapani as she came to know about their affair and raised objection against Debasish’s frequent visit to their house invited by Ashima”.

On the fateful night they gagged Binapani, with a piece of cloth and hit her on head with a blunt object killing her on the spot.