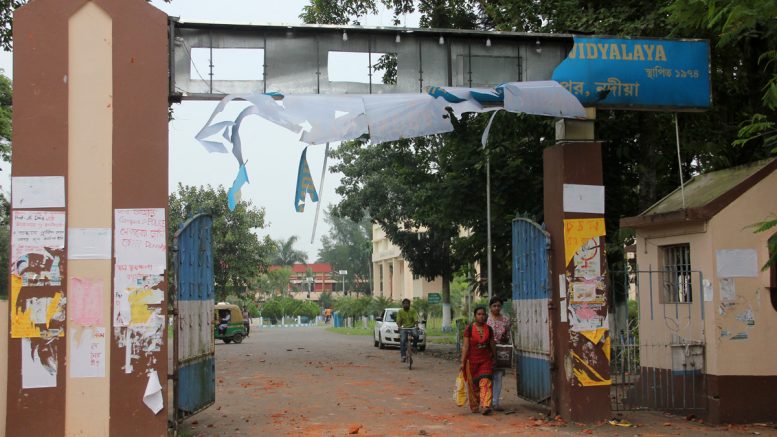 Mohanpur, Sept. 13: Students and teachers of Bidhan Chandra Krishi Viswabidyalaya on Thursday demanded resignation of vice chancellor Dharanidhar Patra in the wake of attack on agitating students by armed miscreants at the administrative building and ladies hostel on Wednesday night. A banner condemning attack on students

The students and teachers on Thursday boycotted classes for indefinite period accusing the vice chancellor for failing to provide security to the students. The vice chancellor, however, refused to resign. He later in the evening held a meeting with the teachers and later announced to set up a high power fact finding committee to conduct probe on the alleged incident. The VC has also lodged a police complaint against unidentified miscreants at Haringhata police station late in the evening.

He, meanwhile, also announced removal of university’s Security in charge Uttam Kar for his failure to handle the situation and dean of Students’ Welfare professor Goutam Chakraborty for failing to control the situation. However, no formal order was issued by the University confirming the removal of the two officers till late in the night.

The students and teacher, however, turned down the vice chancellors decision to set up high power probe committee.

Reiterating their demand of a specific police complaint against a local Trinamul Congress Chatra Parishad leader, who led the attack, the students later gheraoed vice chancellor at his chamber, which continued till midnight until he fell ill and agreed to do so. The students claimed that the VC has agreed to lodge a fresh FIR accusing the TMCP leader of attack and would issue formal removal orders of two deans and the security in charge. The students at the same time also reiterated their demand of VC’s resignation.

Meanwhile, students said that they would continue boycotting classes again from Friday until their demands are fulfilled. The teachers have also decided to join them until the VC resigns and removes the two deans.

A fourth year student of agriculture faculty said, “The vice chancellor was involved in the attack as he used a section of TMCP activists to stop our demonstration. He has done it in connivance with two deans – Professor Goutam Chakraborty and Professor Srikanta Das. We will not satisfy with anything without the resignation of the trio”. The students have also said that they would lodge a police complaint too having lost faith on the VC.

“We strongly believe that Vice Chancellor had role behind the attack on us. So an internal probe will yield nothing” –  An agitating student

VC Professor Patra, however, said “I have urged the students to have patience. I will also talk to them to sort out the issue”. But, the students refused to relent.

Trouble began on Wednesday night, when around one hundred armed miscreants with their faces covered with clothes entered campus breaking the main entrance and started beating up the agitating students who had been in a sit in demonstration since September 6 demanding resignation of dean of students welfare and agriculture faculty. The miscreants led by a local Trinamul Chatra Parishad leader entered the administrative building, ransacked it and opened fire, removed the agitating students from the spot who were demonstrating there demanding resignation of two deans for their alleged involvement in inviting police to campus earlier on September 5. A bullet that was fired by miscreants

A student said, “The miscreants who were about 100 beaten up us with iron rods, cycle chains, and bamboo poles indiscriminately. They molested the girls on the spot and threatened them of raping and evicted us from the place. They later scaled the wall to enter the ladies hostel and attacked the girls, molested them in the same manner. But, some students from hostels rushed in and gave them chase when they go outside but, started throwing us stones in the dark of night. Ten students were injured in the incident, but we could not take them to hospital. We repeatedly called police and vice chancellor but they remained mute. Police came later at the spot but, they were seen having jovial talks with the attacking miscreants”.

Today members of different teachers’ organizations including Trinamul affiliated West Bengal College and University Professors’ Association accused the vice chancellor for his ‘sheer incapability’ to handle the crisis at the campus.

Professor Gorachand Hazra, vice president of WBCUPA’s BCKV unit said, “We support the demand of Vice chancellor’s  resignation. He is responsible for what has happened inside the campus and failed to provide security to the students”.

Teachers’ Association secretary Professor Subhash Koley said, “It is clear that the Vice Chancellor is quite incapable to handle the situation. The situation now demands his resignation to restore normalcy in the campus”.