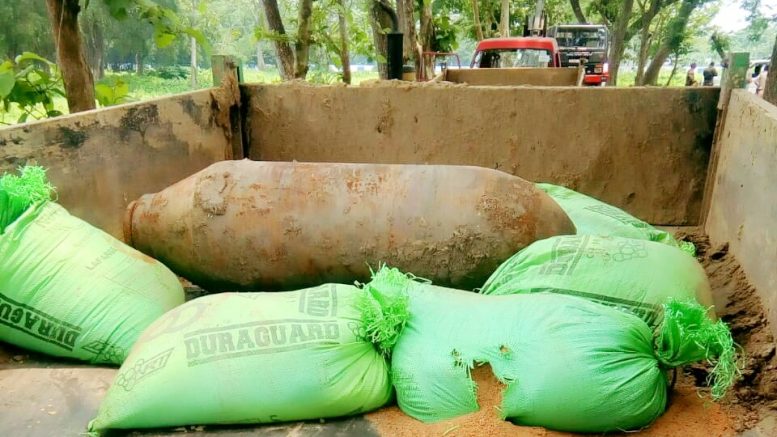 One of the bombs being taken for defusing

Majhdia, May 22: A team of Indian army today started the defusing process of the two unexploded war time bombs those were found during reclamation of a pond in Nadia’s Hanshkhali on April 15. The bombs, weighs over 200kg, look similar to ‘general purpose bombs’ (GP bombs) are approximately 75 years old, which were found in Choto-Chupria village. Today the bombs were taken to a land inside a farm of state agriculture department in Bhajanghat village of Krishnaganj where army officers from Calcutta began the defusing works. A senior officer of Nadia police, who has been looking after the entire arrangement said, “The defusing process will be time taking. A 30-ft deep ditch will be excavated first layered with sand where the defusing process will be begun. It will take at least ten days to complete the process”. Earlier the war time bombs were kept in an isolated place. A team of Indian army examined the bombs in last month. A retired army officer said, “The bomb found in Hanskhali look almost similar to GP bombs, dated late 1940s. The GP bombs are of medium capacity and weighs around 500-pounds (227kg). Explosive like Trinitrotoluene, known as TNT is used in such bomb made of thick metal cover. This bomb was developed for low altitude attack during 1940s”.