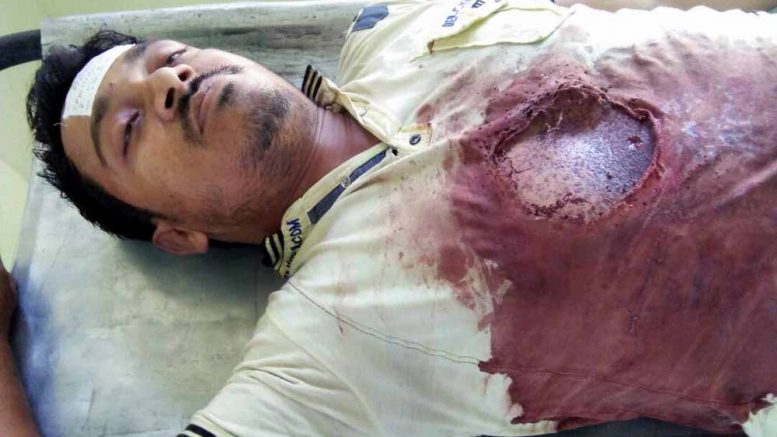 Kalyani, May 16: A youth from Nadia’s Dhubulia, who recently started car rental business and doing his MA through distance learning system, was allegedly shot dead during the wee hours of Tuesday morning while trying to resist a car hijacking bid by three persons who booked his car for visit to Dakshineswar temple last night. The bizarre incident occurred on Naihati-Amdanga link road in North 24parganas.

Victim Rafiqulul Sheikh (21) was accompanied by his friend Arfan Sheikh (22), who somehow managed to escape the spot driving the vehicle fast taking him inside the car. Rafiqulul was taken to JNM hospital in Kalyani, where doctors declared him brought dead.

Informed by the hospital authorities, Kalyani police recovered the body and sent for post mortem. Police have also started a suo moto murder case and detained Arfan for interrogation.

A police team later in the afternoon took Arfan to the place of the crime in Amdanga for a reconstruction of the incident.

Additional SP Swati Bhangalia said: “We are questioning the youth. The veracity of his statement being examined to find out what exactly happened. He is not beyond suspicion. However, it is too early to comment about the exact motive behind the murder”.

Victim, son of a farmer bought the car three months ago for rental service while studying MA through distance learning under Kalyani University.

His sister Selina said: “My brother was not sure of a job so started the business”.

According to family members on Monday night victim’s friend Arfan, who also have car rental business, got a booking for visit to Dakshineswar. But as his car was already engaged otherwise, he passed the booking to Rafiqul.

Victim’s elder brother Mustaq Sheikh said: “It was on Arfan’s request Rafiqul agreed to go. As my brother was little acquainted with roads in Calcutta, Arfan also agreed to accompany him and both left home at about 10pm”.

Arfan in his statement told police that he got a booking for one Amit Das, a resident of Naihati, through a know person from Tatla village of Dhubulia last night.

An investigating officer said: “As per Arfan’s statement Amit, who went to a relative’s home in Dhubulia boarded the car from there at 10.30pm; later on four other persons boarded the car from Krishnanagar and Kalyani. But, near Amdanga Amit decided to go home first for a bath and then to proceed further. As a result the car took Amdanaga-Naihati link road, they decided to take break. Arfan was then driving the car. But a little away, they asked to stop the car and tried to drag out Arfan and Rafiqul out of the car who was seated on the front two seats. This developed a scuffle when someone from the miscreants fired at Rafiqul. Arfan then somehow accelerated the vehicle fast and escape from the spot to reach JNM hospital in Kalyani, where Rafiqul declared dead”.

The sleuths, however, not convinced about the Arfan’s statement.

An officer said: “There are lot of inconsistencies and absence of logical interpretation found in his statement. It is not clear also if there was at all any hijack attempt A lot questions have also remained unanswered for which we are speaking to family members of the victim and trying to know about any other possible reason that could play a role behind the murder”.

Victim’s brother Mustaq said: “We have given police the contact details of Amit Das and his relatives in Dhubulia, who fled from the spot after the incident”.