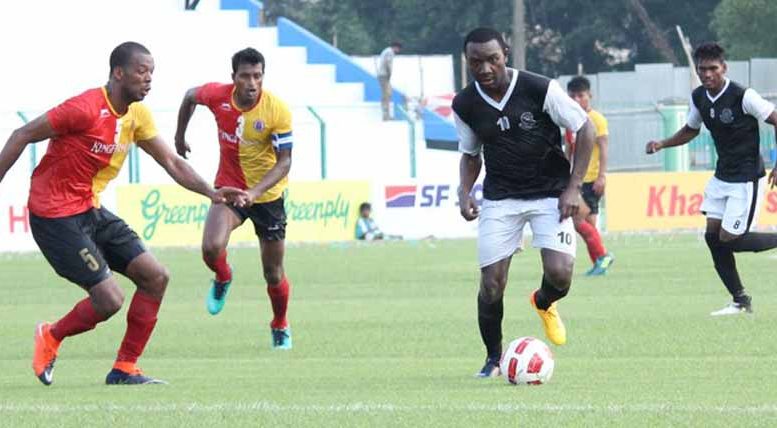 Kalyani, Sept. 16: A goal barely 2 minutes ahead of the final blow by Willis Plaza today saved the honor for title aspirant East Bengal in their Calcutta Football League premier division-A match as it finished the match 2-2 against Mohammedan Sporting club played at the Municipality stadium in Kalyani.

The result of the match also provided a fresh opportunity to arch rival Mohun as it has brought back the team in the title race of the league with same point. East Bengal, however, still owns little edge over the Green and Maroon brigade due to goal difference.

Today East Bengal took the lead in the second minute of the game through Syrian midfielder M Al-Amna, who put the ball into the net in by a spectacular volley from an areal pass by Arnab Mandal.

But Mohammedan came back strongly making repeated efforts to equalize. The coveted success came on the 23rd minute when Jiten Murmu sent the ball home from a cross by Ogba Kalu.

The equalizer revived the black panthers as the launched repeated attacks into the East Bengal’s box reinforcing men in the midfield. The black and white brigade took the lead as Cameroon striker Aser Dipanda Dicka scored from a final pass by Mumu in the 67th minutes.

East Bengal, however, managed to equalize barely two minutes ahead of the final whistle when Trinidad striker Willis Plaza made the spark to save the honor for the team by putting the ball to Mohammedan’s home.

The 2-2 draw, put the East Bengal at the same position with Mohun Bagan in the league table, leaving the satisfied with 19 points from 7 matches. In other terms it helped the green and maroon brigade back to the race for the title.