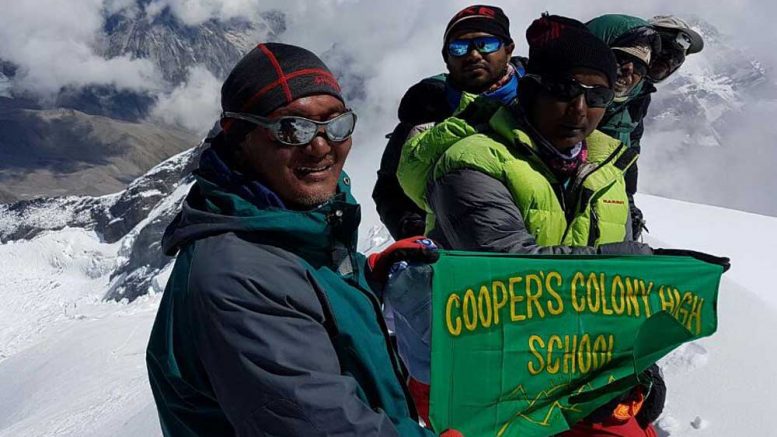 Rumpa at her school with the students on Wednesday.

Ranaghat, Sept. 13: Rumpa Das (31), a teacher in English attached to Cooper’s Colony high school in Ranaghat has become the first woman from Nadia to reach 6387 meter (20950 ft) high Black peak on September 6. A trainee with the Mountaineers’ Association of Krishnanagar (MAK), the young teacher climbed the peak along with seven other male members of the team led by Basanta Singha Roy, who reached the summit of Mount Everest (8848 meter) in 2010.

The Black peak, known otherwise as “Kalanag” is the highest peak in the Saraswati mountain range. The peak is located close to the Ruinsara Valley. It was first summitted in 1955 by JMT Gibson; a teacher in English attached to Dehradun based Doon School

Rumpa returned home in Ranaghat Nasra on Tuesday evening. She also returned to her normal routine today resuming classes in her school where she was also felicitated by her colleagues for the feat.

On August 25, a team of 18 members of MAK which include 3 women began the journey for the Black Peak from Garwal of Uttarakhand. However, only 8 members could ultimately climbed it. Rumpa was the only woman to reach the peak, where she proudly erected the National Flag and that of the Cooper’s Colony school where she teaches.

The MAK team reached the summit of the Black Peak peak at 2.30am. Apart from Rumpa, the seven Influenced by her husband Suman, she joined MAK in 2015 and done her firsttraining at Sushunia hill.

“Since I came in touch with my husband, the hills became my passion. My husband was also a mountaineer. But, he had to give up due to an injury. Nevertheless, he remained a driving force behind me that helped to continue my passion. I have undertaken endeavors earlier also, but success came for the first time in last week. I am grateful to all the members of MAK and particularly Basanta Singha Roy without his help my dream would remain unfulfilled”, Rumpa said.

Speaking about Rumpa, team leader Basanta Singha Roy said: “Rumpa is mentally very strong and physically fit enough to undertake any difficult expedition. I am strongly hopeful that she would make it higher in near future”.